Two professors at Queen Mary, University of London were made Knights of the Order of Academic Palms on Monday 18 January 2010. 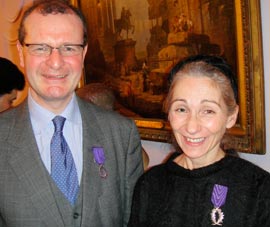 The prestigious title, Chevalier de l'Ordre des Palmes Académiques, is bestowed by the French Ministry of Education upon those who make major contributions to French education.

Professors Michael Moriarty and Brigitte Granville were invested by Maurice Gourdault-Montagne, the French Ambassador to the UK at a ceremony at the French Embassy in London. Both received a medallion to mark their achievements.

Centenary Professor of French Literature and Thought, in the School of Languages, Linguistics and Film, Michael Moriarty is a specialist in seventeenth-century French literature. He is also a Fellow of the British Academy.

“It is very gratifying, when you devote your career to studying and teaching the literature of another country, to find that your efforts are acknowledged there,” said Professor Moriarty.

Brigitte Granville is professor of International Economics and Economic Policy in the School of Business and Management and director of the centre for globalisation research at the College. Her research focuses on the application of macro monetary economics to critical contemporary issues. Brigitte is working on a monograph on inflation, Remembering Inflation (Princeton University Press).

At receiving the award, Professor Granville said she was “pleased and flattered”. “As one of the Palmes recipients to have made a career outside France, I consider myself more a beneficiary of the French national education system. It has equipped me well for a life in the challenging, international environment of higher education.”

The Order, originally created by Napoleon to honour top scholars at the University of Paris, is an Order of Chivalry of France and one of the oldest civil decorations in the world.