“Don't let anyone rob you of your imagination, your creativity, or your curiosity. It's your place in the world; it's your life.” - Mae Jemison, first African American woman astronaut in space

Every single significant person in Physics advertised to me in school was a man. Every theory taught in school classes, every name mentioned was that of a man. You’ll hear ‘Marie Curie’ once in a while but it was always implied that some achievements by men were more worth mentioning.

Being from a working class background and attending a state school that mainly focused on the arts, science never seemed like a path for me. Discouraged by the treatment of female-identifying people in the field at a very young age, I didn’t think I would even succeed in getting my foot into a field that I’m genuinely interested in. I didn’t see anyone that was of my skin colour, I didn’t get taught by anyone who understood my background enough  that I felt comfortable talking to them. Without nepotism, it didn’t seem like I would go far when it came to connections, so I did my best to ‘fight the system’. It was all a whirlwind of doubt for the first 16 years of my life, until I found an organisation outside of school that was willing to help give me the experience I needed to realise that there is so much more for me to explore in Physics. 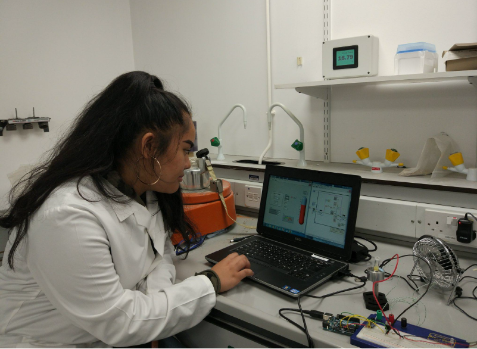 Though life comes with hardships, I was privileged enough to have access to widening participation programmes that enhanced my love for Physics and academia. I applied to every summer school I was eligible for, I took every opportunity available to me and luckily, this was enough to solidify my love for the subject. These programmes not only introduced me to like-minded people in STEM, it also introduced me to the world of research, and lifelong friends. I was able to see true representation in the field, which opened my eyes for what could be me in the future; it gave me the motivation to do well in my studies so I can hopefully contribute towards real research in the future.

After being told numerous times that Physics is a boy’s subject, I refused to adhere to the borders that society has put around me. Physicists such as Dr Maggie Aderin-Pocock, Shirley Ann Jackson, Gay Jane Perez and Dr Chien-Shiung Wu have allowed me to see that although the field I am currently in will be challenging, we must not allow gender and societal norms to deny our right to curiousity and knowledge. Physics is everyone’s subject.