A lifeline at risk – the impact of pandemics on girls’ education

Education for girls in low-and-lower-middle income countries (LMICs) is often a lifeline, which reduces their likelihood of early pregnancies, premature marriage, susceptibility to abuse and violence, as well as financial instability, hardships, and dependencies later in life, writes our Policy Fellow Nina Prusac. 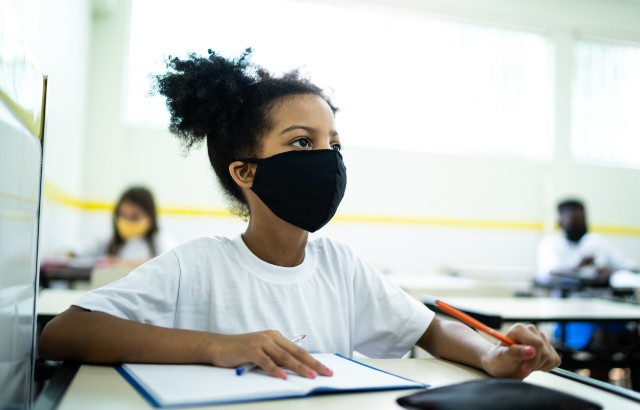 A schoolgirl wearing a face covering studies in a classroom

Girls’ education also reduces the instances of child marriages, sexually transmitted diseases, malnutrition, and child mortality. A girl’s income in the future will increase on average by 10 to 20 percent for every additional year of education so creating better and healthier living conditions for them, their children, and families, creating a lasting chain of improvement. However, with the closure of schools during the coronavirus pandemic, an estimated 11 million girls will not return to education, losing this lifeline and changing the course of their lives.

School closures caused by pandemics are linked to a spike in teenage pregnancies. The time normally spent in school is spent with increased interaction with men and boys, leaving girls vulnerable to sexual exploitation. The protective environment of a school is often lost when girls take jobs to help with the financial impact of the pandemic, or in everyday situations where they encounter pressure to engage in intercourse and transactional sex, leaving them more vulnerable to sexual violence. The link between school closures and early pregnancy was evidenced in Sierra Leone during the Ebola outbreak of 2014-2015 when schools closed, leading to a spike in teenage pregnancies. For example, reports show that during Ebola school closures in Sierra Leone, teenage pregnancies which doubled (11,000 teenagers). In addition, 16% fewer girls went back to school once they reopened. Furthermore, a World Vision Ebola report found that, in some communities, there was up to a 65% increase in teenage pregnancies. Similarly, in Zimbabwe, it has been estimated that after Covid-19 measures, half the girls in their exam classes are not going back to school because of teenage pregnancy and marriage.

The devastating effect on girls’ education caused by the teenage pregnancies during the pandemic is further exacerbated by discriminatory policies of banning pregnant girls from attending school. Upon reopening of schools after the Ebola outbreak, Sierra Leone and Tanzania were among the countries which committed to their pre-existing policy of banning ‘visibly pregnant girls’ from continuing their education. These policies, not only condemn girls and their children to a more difficult, poorer, and unhealthy life path, but also severely damage the economy of countries, further exacerbating the consequences of pandemics in LMICs.

In addition, the economic impact on families of pandemics sometimes force girls into transactional sex, as well as premature marriage, which parents sometimes choose for their daughters as a way of coping with their financial pressures. For example, in Indonesia, the rate of child marriages doubled in the first six months of 2020 (to 33,000 child marriages), in comparison to 2019.

Furthermore, health education taught in schools is vital for the health and long-term well-being of girls. It reduces the chances of contracting sexually transmitted diseases and creates awareness of practicing safe sex. Research from Uganda shows that an increase in girls’ secondary education resulted in a sharp decline of HIV infections as well as greater abstinence.

While women on average put in three times as many hours of domestic and care work compared to men even before the pandemic, both men's and women’s amount of work has increased. However, women are still bearing the brunt, and the daughters are the ones contributing significantly more than the sons. UNICEF finds that girls between the ages of 5 and 14 spend 40 percent more time on these types of tasks (including collecting water and firewood). This means that girls spend approximately 160 million more hours a day doing chores than boys their age. With the closure of schools and stay-at-home measures, additional unpaid domestic work such as cleaning, cooking, and care, has disproportionately fallen on girls so reducing the time and energy they have for education. During the pandemic, these disparities are only exacerbated. Their World reports that in the UK 66% of girls and women aged 14 to 24 spent more time cooking since the outbreak of COVID-19 compared to 31% of boys and men. In LMICs the burden of unequal unpaid work distribution has even more of an effect on girls, their education and future income, financial independence, and drop-out rates, creating a vicious circle. The disparities are even higher in the poorest and most marginalised communities and slums, where girls, who would benefit the most from staying in education are required to perform care work for sick and the elderly who are most susceptible to COVID-19 and other diseases.

Moreover, when primary caregivers are not present, due to increased workload outside of the household due to pandemic-related financial hardship, illness or death, girls take on these responsibilities neglecting their education. This often increases drop-out rates during and after the pandemic.

Policy responses and the role of education in changing attitudes

For 111 million girls living in the world’s poorest countries, in conditions of extreme poverty, conflict and crisis, accessing and receiving quality education is already a struggle. The Ebola pandemic provided an indication of the likely impact of COVID-19 on girls and the measures needed to counter the worsening gender inequalities. Some countries like Sierra Leone have responded by abandoning policies of banning pregnant girls from continuing education. Furthermore, it is important to note that significant progress has been made in LMICs in narrowing the gender gap in education. However, the COVID-19 pandemic may set back progress towards women’s equality in LMICs by decades. To prevent that from happening, there is an urgent need for adequate policy response. Governments must realise the gendered aspect of the pandemic and commit to gender equality in their response. Girls’ needs, particular obstacles, stereotyping and stigma, protection and safety must be recognised in the education recovery plans, as well as other sectors of government. There needs to be an economic support system and a system of food distribution, during and after the pandemic, which will alleviate the financial problems that lead girls to abandon school and seek work. During lockdowns, distance learning practices, materials, and programmes must take into consideration the digital gender gap and the needs of the most marginalised that may not have access to digital education at all. In addition, measures that incentivise return to school such as fee-waivers and fully free education, meal opportunities, transportation links, and abandoning policies that ban pregnant girls from continuing education, are of crucial importance.

The aforementioned policies, and experiences from previous crises, if implemented and applied properly should help in mitigating some of the major issues of COVID-19. However, the underlying problem lies with gender stereotypes and the still widely held view of women as the lesser being, as an object for procreation, and the one who is naturally fit for domestic work. In the described circumstances, the woman is the one bearing the responsibility, the ‘shame’ of pregnancy, she is the one denied education and the one whose life course is altered because of it. The woman is the one who is dogmatically inclined to take care of the housework and care-work, and the one to abandon her education or paid work to do so. These circumstances leave them financially dependable, less likely to strive for better living conditions, and more likely to be susceptible to violence.

For the education system to be ‘built back equal’, education should be free, the socio-economic conditions of both girls and boys living in LMIC’s should be drastically improved, but most importantly there needs to be a systemic shift in perception of the equal value of boys and girls. This could possibly be best achieved through the education system which, rather than being based on regurgitation, ought to be used to correct broader inequalities and malpractices in societies (a positive example of this is Kenya’s ‘Consent classes’ ); on teaching values of non-discrimination, tolerance, and human rights. It has a vital role to play in educating the next generation of feminist women and men who can help address the underlying values and attitudes which give rise to the inequalities now faced by girls as a consequence of the COVID-19 pandemics.

Nina Prusac is an LLM Human Rights student at Queen Mary University of London and a Policy Fellow of the Institute. She got her first degree in General Laws from University of Split, Croatia and conducted her Master thesis research on the topic ‘Refugees in International Law’ at Università Europea di Roma, Italy. Some of her current professional work includes internships at the International State Crime Initiative, and an externship at Cosmonauts. Her research interests revolve around critically examining human rights and humanitarian law and their misuse and appropriation, grave violations of human rights and their societal, economic and political contexts, corporate and state crime, and the concept of state exceptionalism.