Philip Ogden is Emeritus Professor of Geography. He served as Senior Vice Principal of Queen Mary from 2005 to 2011, with particular responsibility for estate development. He was previously Vice Principal for the Humanities and Social Sciences (1998-2006) and Head of Geography (1992-6).

His research interests include demographic change and migration. He is currently working on contemporary household changes in European cities, both in suburbs and central cities; and on French rural society 1900-1950.

He also has an interest in higher education policy, particularly with respect to university building development for teaching and research. He was recently part of a research team on 'Learning Landscapes in Higher Education' funded by HEFCE. He has been closely involved in the oversight of many building projects at Queen Mary including the new Arts Two building, the £39 million Graduate Centre and the renovation of a number of listed buildings. In 2015, he was elected Chair of the UK Higher Education Design Quality Forum, which brings together universities, architects and other professionals. He serves as external consultant to a number of other universities, including the University of Cambridge where he is the external member of the £300 million Cavendish III Physics Project Board.

He chaired the St Paul's Way School Foundation Trust from 2010-15 and is now a Patron of the school. He served as a Trustee of the St Bartholomew's Hospital Medical College Trust from 2003-13 and of the Central Foundation Schools of London 2010-13. He is currently a Trustee of the London Chamber Orchestra and was elected to the Academy of Social Sciences in 2009. He was made a Freeman of the City of London in 2009 and admitted to the Livery of the Drapers' Company in 2012. He served as Master of the Company in 2018/19. He joined the Governing Body of Bancroft's School in Woodford Green in 2011 and was Chairman from 2013 to 2018. 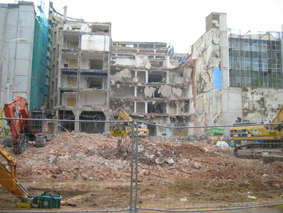 Population Change in Central Europe
Ray Hall and Philip Ogden are currently working collaboratively on a project that researches population change in European Cities. They are particularly interested in investigating household change and the growth of living alone and non-traditional household forms. They have just received a small grant from the Volkswagen Foundation as part of a programme entitled 'socio-spatial consequences of demographic change for East Central European cities'. For this project they are working with colleagues from Leipzig, Poland and the Czech Republic. They will be adding a comparative dimension using examples from British and French cities.

Household changes, migration and reurbanisation in the UK, France and other European countries
Changes in the numbers and types of household have been quite remarkable over the last two or three decades. This project (with Dr Ray Hall at QM and funded by the ESRC, EU and British Academy) is concerned with the UK, France and other European countries, particularly with the rise of one-person households. It is also interested in associated patterns of migration at both national and regional (especially urban) scales. Principal sources include censuses, as well as longitudinal data from the Longitudinal Study (England and Wales) and the Echantillon Démographique Permanent (France). The research also embraces qualitative methodology.

A Nuffield Foundation grant to Philip Ogden concentrates upon recent household changes in leading British and French cities. A further phase of the project (with Ray Hall and Stefan Buzhar at QM and European partners in Germany, Slovenia, Italy, Spain and Slovakia) is looking particularly at household changes and reurbanisation.

A research network was established in 1998, funded by the British Council and the Ministère des Affaires Etrangères (Paris), bringing together researchers from the Population Dynamics and Health Research Group at QM (Ogden, Hall, Curtis) and from the Universities of Paris, Lille, Lyons and Toulouse. The principal theme of collaborative research is household and population change in British and French cities, subsequently expanded to other European countries (see above).

Afro-Caribbean migrants in France: aspects of residence, employment and return migration
This project formed part of the department's broad and long-standing interests in migration trends in nineteenth- and twentieth-century Europe. The present project is set within the context of immigration to France since the Second World War, which has become an issue of major social, economic and political importance. By the 1980s the population of foreign nationality numbered some four millions and was strongly concentrated geographically and in particular sectors of the economy.

Although much research, comment and controversy have focused on the population of North African origin, immigrants in fact come from a wide variety of sources both within and outside Europe. This project looked at a highly distinctive group - migrants from the French Caribbean islands of Martinique and Guadeloupe - who, because of their French nationality (the islands are départements d'outre-mer) and the organized nature of their migration, share only in part the socio-economic characteristics of the foreign immigrant population. Quantitatively, they are by no means negligible: the 1999 census indicated that over 400,000 people originated from the départements et territoires d'outre-mer (of whom two-thirds were from the Caribbean) and they have been one of the fastest-growing migrant groups, escaping the immigration controls on foreign nationals imposed during the 1970s and 1980s. This project focused on the process of migration and the role of governmental and private agencies in shaping and implementing migration policy; and on patterns of residence and employment amongst Afro-Caribbean migrants, with particular reference to Paris and to the health service. The latter phase of the project investigated return migration to the Caribbean in the context of changing French government policy in the 1980s and 1990s.

New migrants in London's Docklands
During the 1980s and 1990s, the London Docklands experienced change of revolutionary proportions. The previous two decades had seen the gradual erosion of both port activities and the associated manufacturing and service industries. The population was in decline, unemployment high and social conditions - in an area that has rarely known prosperity - rapidly deteriorating. A number of schemes for urban regeneration had been mooted but it is particularly with the activity of the London Docklands Development Corporation (LDDC) from 1981 to 1998 that the dramatic change in the pace and nature of development is associated. Though the landscape of Docklands has evolved rapidly, with massive office and housing schemes being completed at breakneck speed, the process of change - and the evaluation of 'success' or 'failure' - is highly contentious. Certainly, there is an urgent need for academic research on the area, as it has assumed both national and international prominence.

Research at QM during the 1990saimed to elucidate one aspect of the development process: the arrival and nature of new residents. Funding was obtained in cooperation with colleagues in Paris and Brussels, since there is much to be learnt about the London experience in the light of wider changes in other European cities. The project is thus placed within the context of changes in the financial and economic structure of the city, and their consequences for 'gentrification'. The aim was to investigate the residential and other demographic and socio-economic characteristics of the new population. Among questions of particular interest to us were the geographical origins of the population, their recent mobility history, their family status, number of children, occupation, income, place of work and pattern both of travel to work and of international travel as part of work.

Three sorts of source materials were used: an extensive questionnaire survey in the westernmost part of the LDDC area - Wapping and Limehouse - among residents in properties converted or built since 1981; a variety of material about the character of new residential building in the area, obtained through developers, architects and estate agents; and, as a base against which to compare our results, the small-area data from the censuses of population. Results confirmed some and rejected other aspects of the stereotypical view of the new residential population.

Qualitative research has been carried out in the area as part of the ESRC-funded project on household change noted above.

Philip Ogden and Andrew Hussey 2011 'International university partnerships and the role of the French connection: the experience of a London College' in M Fraser and P Lane (eds) Franco-British academic partnerships: the next chapter (Liverpool University Press) pp. 117-126.

Condon, S. A. and P. E. Ogden (1996) Questions of emigration, circulation and return: mobility between the French Caribbean and France, International Journal of Population Geography, 2, 1, pp. 35-50

Condon, S. A. and P. E. Ogden (1991) Emigration from the French Caribbean: the origins of an organised migration. International Journal of Urban and Regional Research, 15, 4, pp. 505-23