I am a feminist cultural geographer with research interests in geographies of identity, relatedness and belonging. I am particularly interested in bringing together a cultural geographical perspective and a focus on kinship which includes attention to genealogical knowledges and imaginations and practices of making relations. I am currently extending this work by addressing interspecies kinship, entangled family histories of animals and people, and the symbolic, practiced, affective, embodied and spatial dimensions of more-than-human relatedness. 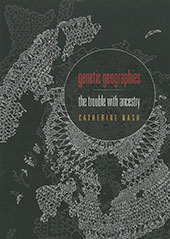 My recent research, initially funded by an ESRC Research Fellowship (2004-7), has focused on ideas of ancestry and origins in popular genealogy and human population genetics. This work addresses what I describe as geographies of relatedness in contemporary accounts of shared and differentiated descent and includes an distinctive focus on the making of ideas of sexual difference through accounts of the geography of human genetic variation. This work has been published as two books:  Of Irish Descent: Origin Stories, Genealogy and the Politics of Belonging (Syracuse University Press, 2008) and Genetic Geographies: The Trouble with Ancestry (Minnesota University Press, 2015).

This work has also has been paralleled by recent collaborative research funded by the AHRC on the home as a site of historical knowledge, imagination, meaning and practice. My collaborative research on the cultural geography of the Irish border, also funded by the AHRC (published as Partititioned Lives: The Irish Borderlands (Ashgate, 2013) reflects my long term in research interests in Ireland and Northern Ireland as well as the rest of the UK.

some recent and key publications

My aim in teaching is to create a stimulating and supportive context for learning. This means fostering active student engagement with concepts, approaches and issues in a wide range of teaching contexts and advising students in module teaching and as a tutor and supervisor of undergraduate, Masters and PhD students. Engaging with ideas and issues in concrete ways through well-prepared and in-depth fieldwork has been an especially important dimension of my teaching and was the basis for the lecture, seminar and field work module ‘Geography, Identity, Belonging’ which focused on these themes in Ireland and Northern Ireland. I reflect on this module in my contribution to a set of papers on teaching political geography in the journal Political Geography:

Student evaluations of this fieldwork based module have been especially enthusiastic:

I have recently worked with colleagues to engage with decolonising initiatives especially, but not only, through my first year teaching, and launched a new third year option module called 'Kinship: Geographical Perspectives'. It has been very rewarding to work through new ideas and issues with students on the module and see how much they have engaged with and achieved through this teaching.

I convene and teach the following modules

Through tutorial teaching and dissertation supervision I contribute to:

I contribute to the module GEG7120 Geographical Thought and Practice and convene the Masters Dissertation Modules: GEG7138 and GEG7139.

My most recent research funded through the British Academy explored interspecies kinship in Iceland through a focus on human-horse relations. This is part of my current research on more-than-human kinship and animal breeds and breeding.

In my current project entitled Pedigree and place: breed origins and relations I am developing a geographical perspective on the concept of breeds and breeding practices and exploring the significance of place of breed origin for human-animal relationships, human social relations and animal lives.

Recent publications from this work include:

i. Living with the Past at Home: Domestic Prehabitation and Inheritance, 2012–2014 funded by the Arts and Humanities Research Council, AHRC 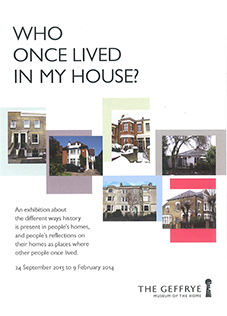 This project extended recent work on the cultural geographies of everyday domestic spaces and forms of public history by addressing how the past is imaginatively reconstructed and experienced in the home. It took up an archaeological focus on ‘pre-habitation’ – which concerns the investigation of once-inhabited places where traces of habitation remain – to explore the experiences, meanings, knowledges, attitudes, practices and material dimensions associated with senses of domestic pre-habitation and inheritance in Britain. The research featured in our project exhibition, entitled  Who Once Lived in My House?, at the Geffrye Museum of the Home, London (24 September 2013 – 9 February 2014).

This project explored the nature and effects of the border between Ireland and Northern Ireland from the perspectives of those who have lived on or near this border since it was established at the beginning of the 1920s, focusing in particular on the period from 1950 to the present day. Though archival sources and interviews the project examined the changing nature of the border over time, its effects on everyday life, the distinctive regional impacts of these effects, the symbolic, material and practised dimensions of the border, and the senses of local, regional, national and cross-border collective identities and differences, interconnections and divisions, through the accounts of those most directly affected by the border. The research has been published as journal papers and in:

Much of the research for the project also features on the project website at: www.irishborderlands.com

iii. Genealogy and genetics: cultural geographies of relatedness, 2004–2007, a Research Fellowship funded by the Social and Economic Research Council.

The programme of research carried out during this Research Fellowship set out to examine the understandings of human relatedness being expressed through and shaped by contemporary popular and scientific explorations of personal and collective origins and ancestry. More specifically, it sought to address the ways in which ideas of human connection and difference and categories of ethnicity, gender, race, and national identity feature within and are reconfigured through the practices, technologies and cultures of popular genealogy, human population genetics and their intersection in genetic genealogy. My research explored the political implications of the geographies of human relatedness being shaped by ideas of shared and distinctive collective ancestry and ancestral origins. The research has been published as journal papers and is the basis of two books:

A full list of publications is available at this link

I welcome enquiries from those who would like to undertake PhD research in cultural geography on topics related but not restricted to my particular research interests. How to apply.

I have a longstanding interest in imaginative ways of engaging with the public and in exploring the intersections between academic and creative modes of producing knowledge and exploring ideas. This stemmed initially from a PhD in geography and art history at the University of Nottingham, which included a focus on visual art in Ireland in the early and late twentieth century, and whose research formed the basis of the exhibition Irish Geographies: Six Contemporary Artists, Djanolgy Art Centre, University of Nottingham, 1997.

That research led to a longstanding interest in the work of artist Kathy Prendergast and a collaborative relationship which later resulted in our successful application for her award of an AHRC Fellowship in the Creative and Performing Arts in the Department of Geography, Royal Holloway. The project we developed there to explore the relationship between geography and visual art entitled Visualising Geographies funded by an AHRC Innovation Award was exhibited in 2004 and documented in Landings: Eight Collaborative Projects Between Artists and Geographers.

I have written about her work in geography and art history publications, and more recently, in an exhibition catalogue essay:

The work of the Living with the Past at Home project is being exhibited at the Geffrye Museum of the Home, London in the Who Once Lived in My House? exhibition (24 September 2013 – 9 February 2014).