I am an economic geographer specialising in the study of the determinants of regional economic growth, the investigation of the evolution of spatial disparities and the formulation of policies for the reduction of geographic inequalities. My most recent research focuses on the role of foreign direct investment in promoting economic development in lagging regions and the territorial effects of the knowledge economy, especially investments in intangibles. Theoretical considerations about the nature of the economic indicators applied in spatial analysis and the construction of new indicators form an important aspect of this work. Regions in Great Britain, the European Union, China and the OECD countries have provided the empirical context for my research.

I am the convenor and lecturer of the undergraduate modules GEG5102 Geographical Information Systems and GEG6108 Regional Economics and Policy.

The objective of the first module is to provide an introduction to the basic concepts and practice of GIS and their relationship to methods of spatial analysis. Fundamental to this objective is to demonstrate how various geographical realities can be represented and modelled in a GIS. Computer lab sessions offer the opportunity for students to learn first hand using in practical sessions the software ArcGIS to import maps, edit/analyse data and generate reports in map and written form.

The second module aims to introduce students to the concepts and analytical frameworks used in regional economic analysis and to evaluate the instruments and policies utilised in Great Britain and elsewhere for the alleviation of regional disparities. Students have the opportunity through a practical data manipulation project to investigate regional economic performances in the European Union and to identify the strengths and weaknesses of a regional economy of their choice. The student reports are designed to follow a format similar to those prepared by regional development agencies and international organisations.

In addition, I teach the GIS sessions of the postgraduate module GEG7120 Geographical Thought and Practice. 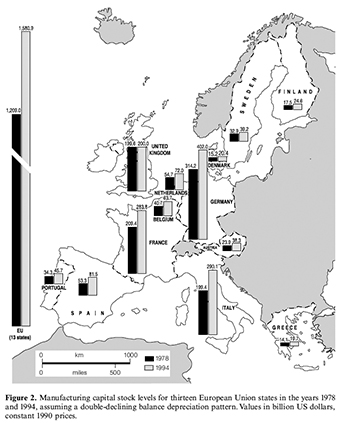 2001–2003 Special Research Fellowship from the Leverhulme Trust to work on the project: ‘Productivity Disparities across the European Union’.

The main aim of this project was to examine the impact of the European integration process on the evolution of spatial inequalities. The eradication of internal borders placed European regions under tremendous pressure to enhance their competitiveness.  This research attempted to investigate four issues arisen in relation to the dynamics of change. The first issue concerned whether a convergence process was under way or the gap between advanced and lagging economies became wider. The second issue related to the sources behind the productivity differences and in particular to the impact of variables, such as industrial restructuring, fixed capital accumulation and R&D expenditure on the evolution of productivity. The third issue regarded the perspectives that these indicators provided about the nature of geographic inequalities in contemporary Europe. Finally, the fourth issue concerned the policy lessons that could be drawn from the productivity analysis for the formulation of appropriate policies for the alleviation of spatial disparities. 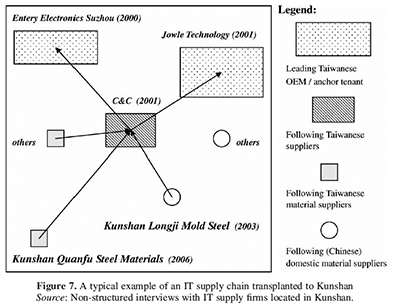 This research project investigated the driving forces of the dramatic transformation of Kunshan, a small city near Shanghai in China, from an agricultural area to a global node of the information technology (IT) industry within a period of just 25 years. Contrary to conventional wisdom Kunshan managed to gradually emerge as new type of cross-border IT centre through an innovative local foreign direct investment (FDI) policy, inflows of Taiwanese investments and integration into the Taiwanese science parks’ networks. In addition, the project considered the future of Kunshan’s economy and drew some potentially valuable policy lessons for lagging regions in other parts of the world that aspire to embark on FDI-driven development strategies.

A full list of publications is available at PubLists

2003–2005 Secondment to the Territorial Statistics and Indicators Unit, Organisation for Economic Co-operation and Development (OECD) to contribute to the development of the OECD Territorial Database. This major project aspired to identify factors of regional growth and untapped local potentials with the view to informing decisions on the implementation of territorial competitiveness-enhancing policies. The spatial coverage of the project was extensive comprising of around 2300 regions from 30 countries spanning over four continents.