I specialise in the study living and fossil ostracod crustaceans, both marine and freshwater, and their applications in palaeoclimatology, palaeoceanography, biogeography, crustacean phylogeny and the evolution of sex and parthenogenesis. My current research focuses particularly on developing my Mutual Ostracod Temperature Range method and applying it to the quantitative palaeoclimatic reconstruction of Quaternary archaeological sites. I also work on Mesozoic and Palaeozoic ostracods and their applications. I collaborate in multidisciplinary research with scientists in the UK as well as mainland Europe, Japan, Canada and the USA. I explore Mars in my spare time.

Since joining QMUL in 2003 I have taught a wide range of undergraduate topics including environmental hazards, palaeoecology and Geographical Information Systems. I like to integrate lectures with workshops, seminars and practical work in the classroom or laboratory and in the field, and I am active in developing and using e-learning resources.

I am currently involved in the delivery of the following modules:

Aspects of my research are incorporated into my teaching. For example, over the past five years, lectures and practical exercises based on my Mutual Ostracod Temperature Range method featured in the second year Global Environmental Change and Digital Worlds modules. Consequently, several students became sufficiently interested and enthused to undertake successful major projects aimed at developing, testing and applying aspects of the method, leading in turn to postgraduate work on the same topic in two cases and in a third case to co-authorship of a research publication. Thus both research and teaching have benefited from the integration of an innovative palaeoclimate application with undergraduate coursework. Research links have also enabled me to arrange for guest speakers on undergraduate modules, as well as specialist-hosted group visits to the Natural History Museum.

I am Director of Taught Programmes for the School of Geography (since September 2016). I have worked with Thinking Writing staff at QMUL on several projects including CLEAR (Critical Literature Evaluation & Review), a QMUL team contribution (chaired by Morag Shiach) to the Higher Education Academy’s programme Developing and Embedding Inclusive Policies and Practices, a QMUL Working Group on Developing Students' Writing, and DALiC (Developing Academic Literacy in Context). Writing workshops linked to group-based coursework assignments, jointly run with Thinking Writing staff, are a key feature of the Environmental Hazards module. In 2013 I received the QMUL Students' Union Assessment & Feedback award. I gained a Higher Education Academy Teaching Fellowship in 2016.

Quaternary and Recent ostracods and their applications

Ostracods are common microfossils in Quaternary (Pleistocene and Holocene) deposits. Their ecological diversity makes them useful as palaeoenvironmental proxies in oceanic, coastal and continental settings; they are also particularly valuable for reconstructing past climatic conditions (e.g. with the MOTR method) and can be helpful for correlating and establishing the relative ages of the deposits in which they are found. My research involves all of these applications, often as a member of a multidisciplinary team, as well as studies of Recent (living) ostracod taxonomy, ecology and distribution which are essential to understand better their significance as fossil proxies.

The value of ostracods value as Quaternary palaeoclimate proxies, through indicator species, transfer function, mutual climatic range and geochemical approaches, is the focus of a major book project to which 39 international authors contributed, of which I was the lead editor and which was published at the end of 2012.

The Mutual Ostracod Temperature Range method
I use ostracods as palaeoclimate proxies in various ways. My Mutual Ostracod Temperature Range (MOTR) method combines nonmarine ostracod distributional data (e.g. from the NODE database) with modern climate data to establish species’ mean air temperature ranges (e.g. for January and July); thus calibrated, overlapping ranges of fossil ostracods in Quaternary assemblages are used to determine the mutual temperature range within which they could have lived. This has facilitated quantitative palaeoclimate reconstructions for British Pleistocene archaeological sites including Boxgrove and Purfleet and is currently being used in multiproxy studies of Quaternary sites in Italy, Germany, Estonia and Canada.

The NODE (Nonmarine Ostracod Distribution in Europe) database
The primary "training set" source for the MOTR method is the NODE database, initiated by members of an EU-funded project (Evolutionary Ecology of Reproductive Modes in Non-marine Ostracoda: 1994–1996) and further developed in support of two other EU-funded projects (Fauna Europaea: 2000–2004; From Sex to Asex: a case study on interactions between sexual and asexual reproduction: 2004–2008). It currently contains approximately 10,000 records of living species and 2,000 fossil (Quaternary) records; as database steward I welcome approaches from anyone interested in contributing to or using it. NODE is linked to other regional databases via the OMEGA project.

OMEGA: The Ostracod Metadatabase of Environmental and Geographical Attributes
OMEGA will be a global dataset, with applications in palaeoclimate, biodiversity and biogeography research, combining regional datasets and harmonising their taxonomy.  OMEGA will be realised through international collaboration and sharing of regional ostracod databases such as NODE, NANODe in the USA and the Delorme database at the Canadian Museum of Nature.  The development of OMEGA is supported by the EU-funded BioFresh project. Datasets will be made available through the BioFresh portal and through Neotoma. An associated Citizen Science project assists with checking, correcting and validating the geographical coordinates of sites where ostracod species have been recorded.

Ostracods as palaeoceanographic proxiesThe widely accepted  “Platycopid Signal” Hypothesis claims that fossil ostracod assemblages dominated by the Order Platycopida signal dysaerobic conditions on the sea floor, based on the premise that filter-feeding platycopids, able to pass more water over their respiratory surface, were better-equipped than other ostracods to survive in poorly oxygenated waters. I and co-authors have challenged claims of modern biological and ecological support for the Platycopid Signal and have advanced an alternative interpretation, suggesting that platycopid dominance may signify oligotrophy rather than dysaerobia, because living platycopids appear adapted to filter-feed on nano- and picoplankton which are predominant in oligotrophic conditions.

Purbeck-Wealden ostracods: biostratigraphy and palaeoenvironmentsThe mid-Mesozoic was a time of explosive global diversification of nonmarine ostracod faunas, establishing lineages that persist to this day. My research on ostracod assemblages of Jurassic–Cretaceous continental deposits (the "Purbeck-Wealden" in Britain) includes revisions of their taxonomy, biostratigraphical zonation schemes and palaeoenvironmental interpretations that have implications for Mesozoic nonmarine basins worldwide. The application of a palaeobiological approach to the interpretation of Purbeck-Wealden ostracod assemblages has been particularly rewarding; for example, a combination of pollen and ostracod fossils provided evidence for temporary freshwater pond conditions associated with a dinosaur skeleton in a Cretaceous Weald Clay pit in Surrey.

Ostracod evolution and phylogeny
Ostracod shells provide the best fossil record of any arthropods, extending back 500 million years, but the rarity of preservation of their appendages and other "soft parts" impedes efforts to understand their phylogenetic relationships. Ostracods are well-known for providing examples of geographical parthenogenesis and unusual longevity of asexual reproduction.  As a micropalaeontologist I collaborate with zoologists, ecologists and molecular biologists in studying ostracods and crustacean phylogeny as well as the evolutionary ecology of sex and parthenogenesis, e.g. as a participant in the EU-funded project: From Sex to Asex: a case study on interactions between sexual and asexual reproduction (2004–2008).

I have published more than 130 journal articles, book chapters and edited books since completing my PhD in 1980. Selected publications are listed below according to research topics.

Quaternary–Recent ostracods and their palaeoenvironmental applications

Ostracods and pre-Quaternary palaeoenvironments and palaeoceanography

An introduction to ostracods

I previously supervised PhD students at the University of Greenwich, including:

I am currently supervising four PhD students at QMUL: 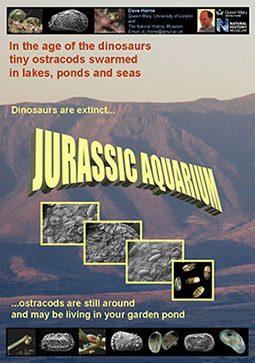 My outreach activities include talks in schools and for local societies, contributions to school taster days at QMUL and a schools masterclass (on tsunami hazards) at the Royal Geographical Society. I am seeking to engage members of the public in a project in connection with my palaeoclimate research and the OMEGA project. In 2014 I recorded a podcast on ostracods for the Palaeocast series. In November 2016 I contributed a guest blog to the Loch Leven National Nature Reserve web site.