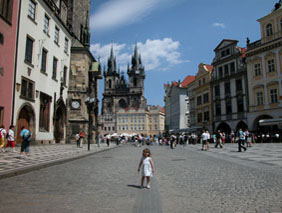 Ray Hall and Philip Ogden are currently working collaboratively on a project that researches population change in European Cities. They are particularly interested in investigating household change and the growth of living alone and non-traditional household forms. They have just received a small grant from the Volkswagen Foundation as part of a programme entitled 'socio-spatial consequences of demographic change for East Central European cities'. For this project they are working with colleagues from Leipzig, Poland and the Czech Republic. They will be adding a comparative dimension using examples from British and French cities in 2007.

During the 1980s, the London Docklands experienced change of revolutionary proportions. The previous two decades had seen the gradual erosion of both port activities and the associated manufacturing and service industries. The population was in decline, unemployment high and social conditions - in an area that has rarely known prosperity - rapidly deteriorating. A number of schemes for urban regeneration had been mooted but it is particularly with the creation of the London Docklands Development Corporation (LDDC) in 1981 that the dramatic change in the pace and nature of development is associated. Though the landscape of Docklands has evolved rapidly, with massive office and housing schemes being completed at breakneck speed, the process of change - and the evaluation of 'success' or 'failure' - is highly contentious. Certainly, there is an urgent need for academic research on the area, as it has assumed both national and international prominence.

The present project aims to elucidate one aspect of the development process: the arrival and nature of new residents. Funding was obtained in cooperation with colleagues in Paris and Brussels, since there is much to be learnt about the London experience in the light of wider changes in other European cities. The project is thus placed within the context of changes in the financial and economic structure of the city, and their consequences for 'gentrification'. The aim is to investigate the residential and other demographic and socio-economic characteristics of the new population. Among questions of particular interest to us were the geographical origins of the population, their recent mobility history, their family status, number of children, occupation, income, place of work and pattern both of travel to work and of international travel as part of work.

We are using three sorts of source materials: an extensive questionnaire survey in the westernmost part of the LDDC area - Wapping and Limehouse - among residents in properties converted or built since 1981; a variety of material about the character of new residential building in the area, obtained through developers, architects and estate agents; and, as a base against which to compare our results, the small-area data from the 1981 census of population. Results obtained so far (see the publication listed below) have been of considerable interest, confirming some and rejecting other aspects of the stereotypical view of the new residential population.

The next phase of the research will integrate further questionnaire surveys with an analysis of the data on family, household and economic status from the 1991 census. We are also using the records of local authority housing departments to establish comparisons with the population in public-sector housing in the area and the way in which patterns of mobility and household structure have evolved over the last decade.

Households and demographic change in Europe

This research concerns the changing geography of European households over the last three decades. There have been substantial changes in both the size and structure of families and households throughout Europe, which reflect broader social changes in the nature of the family and the role and status of women. First, the investigation is concerned with the size and structure of households on a European scale using national censuses and statistical yearbooks. Reference has to be made to broader demographic changes that have taken place over this period, particularly changes in fertility and nuptiality.

The second theme is regional changes within England and Wales. Here the particular focus is the changing household experiences of women aged 20-40 in England and Wales between 1971-81 initially and later to be extended to 1991, using the Longitudinal Study. By investigating longitudinally the lives of young adult women and changes in their household status, one can begin to assess the extent of change in women's lives as reflected in their living arrangements over the last twenty years.

The research maintains a historical perspective on the changing family and household. Here interest focuses on the interrelationships between household and employment structures, especially the role of women's waged work within the context of the household in particular areas of Britain in the nineteenth century, particularly in the Potteries, using census enumerators' books as the major source.

Throughout the work on households and changing European demography, the interrelationships between demographic change and the changing role and status of women is a continuing theme. This is investigated at broad international scales using national data sources and nationally within England and Wales using the Longitudinal Study, focusing on young adult women.

The interrelationships between women, work and household, historically and today, is a closely related theme. This is being investigated using both historical sources and ethnographic and oral history methods. The research is particularly concerned with the mother-daughter relationship and the extent to which the transmission of gender roles from one generation to another is a significant factor in explaining the persistence of the gender division of labour in society at large.