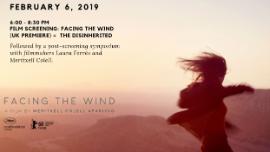 The Centre for Catalan Studies at Queen Mary University of London presents the first evening of its film season The Catalan New Wave: Journeys of the self.

The intimate looks crafted in The Disinherited (Laura Ferres, 2017) , Facing the Wind (Meritxell Colell, 2018), Júlia Ist (Elena Martin, 2017) and La inútil (Belen Funes, 2018) push the boundaries and go beyond the notion of a strictly Catalan cinema to map out experiences that are central to contemporary woman selfhood.

Catalonia has recently become the hub for the new/other tendency in cinema to flourish- a serendipity which the media has termed as the Catalan new wave.

In an era when the Time's Up movement is jolting the traditionally male-dominated Hollywood, the Catalan film industry celebrated an awards gala that was one of its most gender-balanced ever, with an overdue acknowledgment of female nominees and winners.

Directors Meritxell Colell and Laura Ferres will be in attendance and they will join us for a post-screening symposium/discussion.