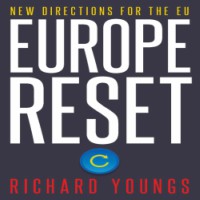 In recent years, Europe has been hit by a series of crises extending to its economy, migration, BREXIT and the situation in Catalonia. All of which point to the need to reform Europe.

France’s President Emmanuel Macron has already voiced his desire for a closer integration amongst countries of the Eurozone.

So, after 60 years of European integration, which direction will Europe go?

Richard Youngs, from Carneige Europe will present his new book Europe Reset and launch the roundtable discussion with proposals on how to make the union more flexible and more accountable. In his view, citizens should play a greater role in European decision-making. There should be radically more flexibility in the process of integration and Europe needs to take a new, more coherent, approach to questions of defence and security.

About the author of Reset Europe:

Richard Youngs is a senior fellow in the Democracy and Rule of Law Program, based at Carnegie Europe. He works on EU foreign policy and on issues of international democracy.

Youngs is also a professor of international relations at the University of Warwick. Prior to joining Carnegie in July 2013, he was the director of the European think tank FRIDE. He has held positions in the UK Foreign and Commonwealth Office and as an EU Marie Curie fellow. He was a senior fellow at the Transatlantic Academy in Washington, DC, from 2012 to 2013.

Youngs has authored twelve books. His most recent works are Europe Reset: New Directions for the EU (I.B. Tauris, 2017), Europe’s Eastern Crisis: The Geopolitics of Asymmetry (Cambridge University Press, 2017), and The Puzzle of Non-Western Democracy (Carnegie, 2015).His proposition to 'reset' Europe will be debated by a panel of experts:

The roundtable event will be accompanied by the UACES Travelling Exhibition of the Treaty of Rome 60th Anniversary in the Queens Building Foyer, Queen Mary University of London.

The Centre for European Research, hosted in the School of Politics and International Relations of Queen Mary University of London, aims at development of a dynamic interface between the academic community and policy officials, NGOs, practitioners and business leaders. It supports research activities with a European focus and promotes excellence in teaching and learning on Europe and is a platform for research student engagement. Launched in 2012, it is currently directed by Dr. Sarah Wolff.