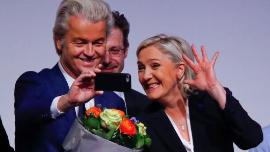 The 2018/2019 CER seminar series is the follow-up to our successful series of last year which hosted several speakers from across the UK and Europe. The first seminar in the new academic year will be held on 15 October. It will focus on one of the most debated social phenomena of our time: populism. In the run-up to the European Parliament election (to be held in May 2019), many forecast noticeable shifts in the composition of, and power relations in the Parliament as populist political forces have been gaining momentum throughout the continent. Our invited experts will discuss the ‘bigger picture’ concerning populism and its significance in a European context with each other and the audience. The evening will be kicked off by Professor Duncan McDonnell who will be presenting on the following:

“The 2014 European Parliament elections were hailed as a ‘populist earthquake’, with parties like UKIP, the French Front National and the Danish People’s Party topping the polls. But what happened afterwards? Which parliamentary groups did they form and why? Based on interviews conducted over three years with senior figures from 14 parties, along with policy position and voting data, this presentation explains these parties’ alliances in the European Parliament. It answers three key questions: Why, unlike other ideological party types, have radical right populists long been divided in the Parliament? Why, although divisions persist, are many of them now more united than ever? And what do their international actions mean for our understanding of the European populist radical right today?”

Duncan McDonnell is Professor of Politics at Griffith University, Australia. He was previously a Jean Monnet and then a Marie Curie Fellow at the European University Institute in Florence, Italy. He has written extensively on right-wing populism, including, with Daniele Albertazzi, the books Twenty-First Century Populism (2008) and Populists in Power (2015) and, with Nadia Marzouki and Olivier Roy, Saving the People: How Populists Hijack Religion (2016). His next book, with Annika Werner, looks at radical right populists in the European Parliament and will be published by Hurst in May 2019.

Stijn van Kessel is Lecturer in European Politics at Queen Mary University of London, and academic member of the Centre for European Research. Previously he has held various teaching and research positions at Loughborough University, the Heinrich-Heine-University Düsseldorf, the Radboud University Nijmegen and the VU University Amsterdam. His main research interests are populism and the discourse, voters and electoral performance of populist parties in Europe, with a particular focus on the radical right. He wrote the monograph Populist Parties in Europe. Agents of Discontent? (2017) and his articles have appeared in various leading academic journals. Since January 2014, Dr van Kessel has been one of the convenors of the European Consortium for Political Research (ECPR) Standing Group on Extremism & Democracy.

Sophia Gaston is the Director of the Centre for Social and Political Risk, based at the Henry Jackson Society and holds a Visiting Research Fellowship at the Institute of Global Affairs in the London School of Economics. A social and political researcher, she conducts international, citizen-focused projects on social and cultural crises, political change, the media and democracy - with a focus on threats to governance in Western nations. Until June 2018, Sophia was the Deputy Director and Head of International Research at Demos think tank. She has formerly held research and strategic roles in a range of UK and international NGOs, the civil service, and private sector. She holds a First Class Honours master's degree in political communication and is a Fellow of the Royal Society of the Arts.

Sarah Wolff is Director of the Centre for European Research and Lecturer in Public Policy at Queen Mary University of London. She is also a Senior Research Associate at the Netherlands Institute of International Relations (Clingendael). Dr Wolff is an expert on EU politics, Justice and Home Affairs (JHA), migration and border management policies, as well as EU-Arab Mediterranean relations and EU development aid. She is author of the monograph The Mediterranean Dimension of the European Union’s Internal Security (2012) and received the LISBOAN Research Award 2012 for her co-edited book Freedom, Security and Justice after Lisbon and Stockholm (2012). Her current research focuses on Secular Power Europe and EU engagement with Islam for which she was awarded a Fulbright-Schuman and a Leverhulme research grant in 2014/2015. Prior to joining the academia, Dr Wolff worked at DG Devco at the European Commission and as a parliamentary assistant at the European Parliament.