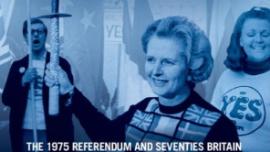 How to win a referendum on Europe

The United Kingdom is the only country in Europe to have held two referendums on membership of the EU. The first, in 1975, produced a landslide for staying in; the second, in 2016, saw a narrow vote to Leave, destroying the government of David Cameron and triggering an earthquake in British foreign and domestic policy. To mark the publication of Yes to Europe! The 1975 Referendum and Seventies Britain, by Robert Saunders, we will be discussing the two EU referendums of 1975 and 2016, their implications and what they tell us about Britain and Europe. Yes to Europe! has drawn praise from across the political spectrum, hailed as "a captivating read, meticulously researched and exquisitely written" (Daniel Hannan) and as "a jaw-dislocating page-turner. If you care about contemporary politics, you really need to read it" (Andrew Marr).

Robert Saunders will be joined by a panel of experts, including Stephen Bush (New Statesman), Gisela Stuart (Vote Leave), Dr Sue Onslow (Deputy Director of the Institute of Commonwealth Studies) and others, with a chance for Q&A.

The event is free - though registration is essential - and will be followed by a drinks reception.

Copies of Yes to Europe! will be on sale after the event at a discounted price.