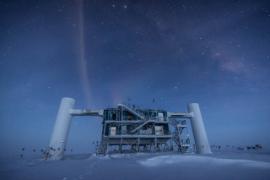 Einstein's special theory of relativity is based on the idea of a property of spacetime known as Lorentz symmetry. This essentially says that the laws of physics are the same for all observers within what is known as an inertial frame. Although Lorentz symmetry is fundamental for both particle physics and cosmology, ultra-high-energy theories which try to unify quantum theory and gravity, such as string theory, do allow the possibility of defects in the structure of spacetime which might violate Lorentz symmetry. So an observation of this so-called Lorentz violation would suggest that we need a new theory of spacetime going beyond Einstein’s. There is therefore a global effort to look for evidence of Lorentz violation.

Mysterious elementary particles, neutrinos are useful indicators to use to look for new physics and new phenomena in the universe. The IceCube Neutrino Observatory at the South Pole is designed to study high-energy astrophysical neutrinos. In this talk, Dr Teppei Katori will describe how he is using data collected at IceCube to look for Lorentz violation, using a technique called "neutrino interferometry". Elusive and hard to detect though they be, neutrinos may provide us with crucial clues about the very structure of spacetime.

The talk will be held in the physics lecture theatre in the G O Jones building on Queen Mary’s Mile End campus. It will be suitable for a general, non-specialist audience, and all are welcome.

Admission is free, and there will be an informal drinks reception after the talk. It would help our planning if you could register your attendance here.

Details of forthcoming public talks by members of the School of Physics and Astronomy can be found here.