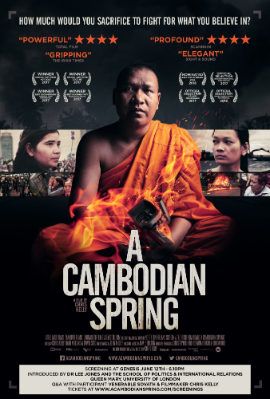 Buddhist monk and award-winning activist Venerable Loun Sovath is harassed, censored, and evicted by his own religious leaders when he becomes a key figure in the land-rights protests that led up to the “Cambodian Spring” beginning in 2013. Two fearless women, children in tow, take charge and lead the growing movement in their community, repeatedly facing imprisonment and violence.

Shot over six years, A Cambodian Spring is an intimate portrait of three people caught up in the chaotic and aggressive sweep of forced evictions and land grabbing in the name of “economic progress”. The film charts the complexities, both political and personal, of fighting for what you believe, asking the audience: how much would you be willing to sacrifice?