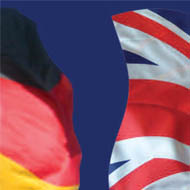 The annual ANGERMION Lecture at the Centre for Anglo-German Cultural Relations.

This event is connected with the launch of Vol IX of the ANGERMION, the Centre's yearbook published by de Gruyter (Berlin/New York).

Sir Anthony Douglas Cragg is one of the most distinguished sculptors of our time. He was appointed Commander of the Order of the British Empire (CBE) (2002), Honorary Doctor of the Royal College of Art, London (2009), Professor at the Universität der Künste, Berlin (2001-2006), and thereafter at the Kunstakademie Düsseldorf (2006), which he led a Principal until 2013. Since 2010, Cragg has been appointed Honorary Fellow of University of the Arts London (2012); awarded Artist’s Medal of Honor of the Hermitage, Russia (2012) as well as the 1st Class Order of Merit of the Federal Republic of Germany (2012). As an artist and public intellectual, Sir Anthony Cragg embodies the essence of Anglo-German Cultural relations in an international context.

Sir Anthony Douglas Cragg will be introduced by Christopher Le Brun, President of the Royal Academy of Arts.