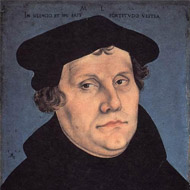 'Cleverness is the garment that suits women least’: Luther and Women

Invitation from the School of English and Drama