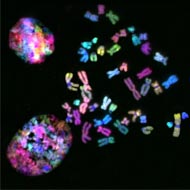 Centre of the Cell's Big Question Lecture series gives you a chance to hear biology experts discuss their work and question them about it.

Our next Big Question Lecture is "How rare is rare? Investigating rare genetic diseases" on Thursday 23rd February at 6pm. The guest speaker is Professor Richard Trembath.

Professor Richard Trembath's research focuses on identifying genes causing a range of rare and common inherited disorders, using established and emerging technologies. Major research interests include understanding the genetic causes of the rare vascular condition known as pulmonary arterial hypertension and the genetic contribution to the development of inflammatory skin disorders including psoriasis. He is also Joint Lead for the East London Genes and Health project a partnership with Queen Mary University of London. This project is one of the world's largest community-based genetics studies seeking to improve health among people of Pakistani and Bangladeshi heritage across East London and beyond.

Richard is Executive Dean of the Faculty of Life Sciences & Medicine at Kings College London. Until 2011, he was Executive Dean of Barts and the London School of Medicine and Dentistry and Vice-Principal for Health Queen Mary University of London. Richard is Head of the Molecular and Medical Genetics Group at Kings College London and Theme Lead for Genomic Medicine within the National Institute of Health Research Biomedical Research Centre at Guy's and St Thomas' NHS Foundation Trust where he is also an honorary consultant in Clinical Genetics. He was elected as a Fellow of the Academy of Medical Sciences in 2003.