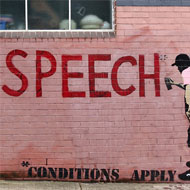 Part of the seminar series on Terrorism & the Law: Freedom and Security in a Networked World, organised by the School of Law, Queen Mary University of London.
The seminar series explores the subject of counter-terrorism and security from a legal perspective and in particular how security responses can be made effective to prevent attacks in the future and their compliance with human rights, in particular freedom of speech and privacy. In particular the series examines the role of social media and the internet in exacerbating the risks of radicalisation and recruitment of terrorists as well as the risks stemming from the use of online profiling for counter-terrorism purposes. The aim is to achieve a broad spectrum of legal perspectives on the issues and capture different stakeholder perspectives (privacy & human rights, law enforcement, industry), bringing together different perspectives.

The series will involve 5 seminars exploring a variety of aspects of the figure of the global jurist, with the following specific themes:

'From national to global citizenship – What are the consequences for free speech?'

Prof Eric Heinze, QMUL
The first seminar of the series will be delivered by Prof Eric Heinze, QMUL. Prof Heinze is Professor of Law & Humanities at QMUL. He has been a Fulbright Fellow (Utrecht), DAAD fellow (Berlin), and Chateaubriand Fellow (Paris). In his most recent book Hate Speech and Democratic Citizenship (OUP, 2016), he reviews ongoing debates about the legality of dangerous, provocative or offensive speech.

In this seminar, Prof Heinze will examine civil-libertarian approach of free speech. Civil-libertarian advocates of free speech have long faced criticisms from both right-wing and left-wing politics. Until recently, however, civil-libertarians could confidently situate free speech doctrine within the boundaries of the nation state. Has the internet swept away that assumption? Are the risks of free speech to be construed not simply in national but also in global contexts? Should Lydia, using Facebook in London, face controls because of her possible effects upon residents of Puna in Pakistan? Indeed should Lydia even face controls because of her possible effects upon her next-door neighbours? One problem with these questions is their initial assumption. We commonly refer to the ‘civil-libertarian’ position rather than the ‘democratic’ position since democracy, it seems, can swing either way: towards greater freedom or towards greater limits, depending entirely on what the population or on what its elected representatives prefer. That assumption is wrong. There is a distinctly democratic approach to free speech which ought not to be confused, on the one hand, with dominant, ‘civil-libertarian’ approaches, or, on the other hand, with straightforward majoritarian preferences. That approach makes it illegitimate to curtail citizen prerogatives of speech even in the face of the new global challenges or terrorism, nationalism, and extremism.