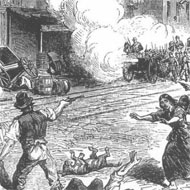 Riots, revolts, uprisings, and revolutions have been a near-constant and a decisive force in shaping New York City’s landscape. From the revolt of the Munsee Indians in the 1640s to Black Lives Matter in the present, political and social tumult has – to a far larger degree than is usually appreciated – determined flows of investment, neighborhood restructurings, and everyday life of the metropolis.

Drawing on research begun by Neil Smith and his students in a seminar on the Geography of Revolution and now nearing publication, I will show how one of the determinants of the morphology and meaning of the urban landscape is revolt and riot, uprising and revolution – anarchists exploding bombs, gardeners claiming empty lots and holding them militantly, the inchoate rage of looters, the occupation of buildings, massive marches, violence by police and protesters. There is at play in the making of the landscape, I will contend, a constant dialectic of spatial form and social revolt, and it is important to understand this dialectic if we want to understand the making of cities as well as the possibilities for social justice in them. Or, as the Harlem Renaissance writer Allain Locke suggested, the 1935 Harlem riot – and by extension other moments of upheaval – was “a revealing flash of lightning.” Revolting New York – both the book and my remarks in this talk – tells the story of the city as it has been not only revealed by such lightning flashes, but also and especially how it has been remade by the lightning strikes of revolt. In doing so, I think, it makes palpable just how power is built into the landscape – and why.

Through both descriptions of revolt large and small as well as historical-geographical analysis (and lots of images), this talk will not only show the remaking of New York’s landscape, but also why it is vital to understand such remaking within the totality of long-term historical change.

Along with the late Neil Smith, he is the General Editor of the forthcoming Revolting New York: How 400 Years of Riot, Rebellion, Uprising, and Revolution Shaped a City (University of Georgia Press, 2018). Mitchell is the author of five books, including They Saved the Crops: Labor, Landscape and the Struggle over Industrial Farming in Bracero-Era California (2012) and The Right to the City: Social Justice and the Fight for Public Space (2003) and is currently at work on a book called Mean Streets: Homelessness, Public Space, and the Limits to Capital. He is also the author of more than a hundred journal articles, book chapters, and essays and has been a recipient of MacArthur, Guggenheim, and Fulbright Fellowships and the Anders Retzius Medal in Gold from the Swedish Society of Anthropology and Geography.

What are my transport/parking options for getting to and from the event?

The lecture will take place at our Mile End Campus - directions to the campus and a map are available here. QMUL is most easily accessible by public transport and is close to both Mile End and Stepney Green Underground stations. There is very limited parking at the campus - contact us in advance if this is required. The lecture theatre is wheelchair accessible. Please contact us if you have any particular questions about accessibility.

Do I have to bring my printed ticket to the event?

It is not necessary to bring your printed ticket with you, but please register so that we can ensure the venue is suitable for the expected size of the audience.