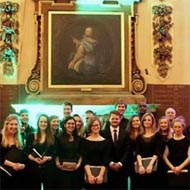 The choir of Barts and The London Students Association and the Queen Mary band will be presenting a concert in the pathology museum on Thursday March 9th at 6.30 for a 7.00 start. The concert will also feature a solo presentation by student Juliette Chupin who will present “La Vie en Rose” – made famous by French singer Edith Piaf in 1947.

The programme features excerpts from the musical “Wicked”, the song “Chandelier” an 18th century madrigal and an extract from Gershwin’s Porgy and Bess.

The band will be playing pieces including “Blame it on the Boogie”, “Respect” and “Don’t know why”.