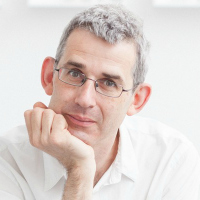 On the Eve of Departure: Art and Exile

During the talk Edmund de Waal will discuss the telling of family stories through words and sculpture, touching on his writing of The Hare with Amber Eyes and works by Paul Celan and Walter Benjamin.

Edmund de Waal is an artist and writer. Born in 1964, de Waal is best known for his large scale installations of porcelain vessels, which are informed by his passion for architecture, space and sound.

De Waal was made an OBE for his services to art in 2011. In 2015 he was awarded the Windham-Campbell Prize for non-fiction by Yale University. He is a Senior Fellow of the Royal College Art and Honorary Fellow of Trinity Hall, Cambridge. He has also received Honorary Doctorates from University of the Arts London, University of York, University of Nottingham, Canterbury Christ Church University and the University of Sheffield. De Waal has been on the Advisory Committee for The Royal Mint since 2012 and is currently a Trustee for The Saturday Club Trust and the Victoria and Albert Museum.

Admission is free but places must be reserved in advance.