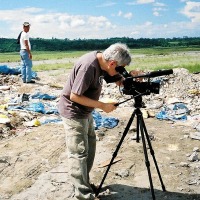 The Centre for Film & Ethics at Queen Mary University of London, in collaboration with Close-Up Cinema, is pleased to host acclaimed American documentary filmmaker John Gianvito, in conversation.

In this event John will be joined by a panel of activists, filmmakers and academics to discuss the theme 'Political Cinema in an Age of Toxicity'. The discussion will reflect on issues raised in his nine-hour documentary film diptych For Example, the Philippines, consisting of Vapor Trail (Clark) (2010), and Subic (Wake) (2015). Conversation will also range more freely, following the suggestion made by the diptych’s title that the Philippines is only an “example” of the systematic destruction wrought by our global cultures of war.

John Gianvito is a filmmaker, teacher, curator, and critic. His films include the feature films The Flower of Pain (1983) and The Mad Songs of Fernanda Hussein (2001). In 2010, Gianvito’s meditative film essay Profit Motive and the Whispering Wind (2007) was named one of the 50 greatest documentaries of all time by Time Out (New York).