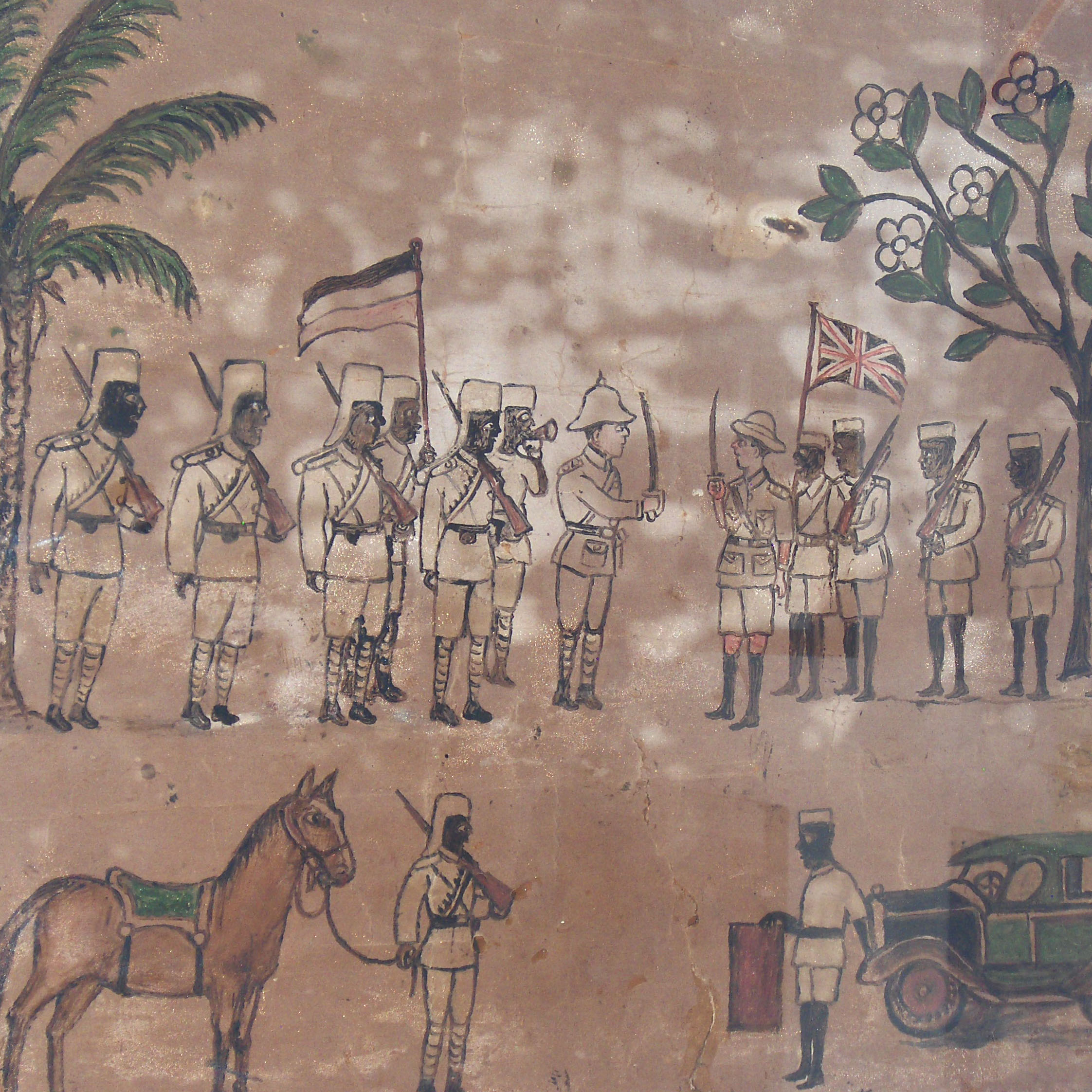 Painting owned by the National Museum of Tanzania in Dar-es-Salaam. It depicts the transfer of power in former German East Africa to the British at the end of the First World War...

International Conference
The Discourse of British and German Colonialism: Convergence and Competition

Abstract
This conference will explore the various connections and synergies between British and German colonialist discourses from the seventeenth century onwards. While it is known that similarities and differences exist in the British and German discourse traditions expressing colonialist ideology, this is an under-researched area in respect of historical texts. A discipline of historical discourse analysis is well-established for German political discourse (see, for example, Horan (2003), Wengeler (2005), Wodak et al. (2009), Rash (2012 and in press for 2016)), but is not well-represented for similar English-language discourse and analysis of the primary texts of colonialist discourse tends to rely upon non-linguistic methods (see, however, Musolff 2010). Papers are invited from scholars working in the fields of historical discourse using the methods of Critical Linguistics, Historical Discourse Analysis, Conceptual History (German “Begriffsgeschichte”) and Critical Metaphor Analysis. Source texts could include political, scientific and philosophical tracts, travel literature, autobiography and fiction. The study of images and of the modes of display of historical artefacts are also considered relevant constituents of discourse. The conference will mark the start of an innovative interdisciplinary project which will broaden the field of historical discourse analysis within the English-speaking world and allow comparison of British and German colonialist discourse. A major achievement of this future project would be to shed light upon the history of discursive strategies to be observed in modern discourses concerned with migration, race relations and post-colonial politics.

Introduction
The age of European colonialism started in the 15th century, with Britain, France and Spain founding colonies in the America. Commencing in the mid-17th century, the economic and political advantages of possessing overseas territories started to influence German nationalist ideology. One read, for example, in Johann Joachim Becher’s Politischer Discurs of 1669:

As with much British colonialist discourse, many such calls for colonial enterprise were cloaked in a message that the colonized peoples would be the major beneficiaries of colonization in that they would be given access to European culture and Christianity. The absence of a unified nation from which cultural and political influence would spread meant, however, that Germany could not operate from the same governmental and financial base as the British, French and Spanish empires.
During the eighteenth and early nineteenth centuries, before Britain and Germany entered into competition with one another as world colonizers, they shared a great deal of intellectual heritage and, particularly within the ruling classes, cultural orientation. This led to both believing in the cultural centrality of Europe in relation to the rest of the world. The aims of spreading what they saw as civilization to the world outside Europe had much in common, in particular their Christian basis. While Germans were welcome to settle in British and Spanish colonies, to a certain extent they felt as though they were contributing to the successes of the colonies of other nations without reaping nay of the same rewards. German explorers were largely unable to raise funds for their own excursions into uncharted territories and joined British expeditions. The British valued German scientific expertise and a largely cooperative relationship developed among explorers. One notable cooperation was that between Johann Reinhold Forster and James Cook on the exploratory voyage of the Resolution between 1772 and 1775 (see Hawskworth et al. 1773, Forster 1778).
During the nineteenth century, the British Empire expanded as a result into the largest on the globe; Germany was left behind and felt outclassed. German colonialist discourse was permeated with the motif of “Sein oder Nichtsein” [to be or not to be], which lent upon a corrupted version of Charles Darwin’s evolutionary theories and a misunderstanding of Herbert Spencer’s “survival of the fittest”. The First World War did not stop the competitive attitude between Britain and Germany, and the settlement of colonial territories at the Treaty of Versailles left German colonialist ideologues smarting and intent on rectifying what they saw as theft of territories which they believed they were justified in reclaiming.

Representative literary and historical texts of the British and German colonial eras will be analysed from the point of view of their discursive function and techniques used. The political, scientific and philosophical influences of key authors, such as Charles Darwin and Friedrich Max Müller upon later colonialist authors will be of particular interest. A methodology will be encouraged that involves the detailed examination of primary sources. Digital analysis will be of particular use where English-language texts are concerned. Access to digital databases for German historical texts is more problematic, since may of key texts have not yet been converted from their original typeface (“Fraktur”) into a format suitable for computer analysis.
The conference organizers have experience in the linguistic analysis of historical discourse, using the methodologies of Critical Discourse Analysis, The Discourse Historical Approach, Argumentation Analysis, and Cognitive Metaphor Theory (see Horan 2003, Musolff 2010, Rash 2012). These methodologies are suitable for the academic investigation of past colonialism and its repercussions because they broadens the scope of study beyond that of the historical events and political messages expressed in discourse. It enables scholars to assess the linguistic, visual and strategic means by which messages were expressed and events described, and thus to identify implications of such assessments for future research. In short, it help us assess not only what is said but how it is said and why it is said in a particular way.
Significant research the themes of colonialist ideology and discourse began in the 1950s and was conducted from a post-colonialist perspective (see Hall 1995, Césaire 2000). Such studies identified the discursive construction of images of a “Self” and an “Other” and the construction in discourse of a “national body” with a common past and these themes were taken up as the basis for critical linguistic studies which further sought evidence of such discourse strategies as legitimation, justification, perpetuation and transformation. Ruth Wodak, Martin Reisigl and J.R. Martin have shown that politically-motivated discourse strategies can be supported by argumentation topoi and linguistic means, such as grammatical constructions, choice of lexis and the employment of metaphors.
The conference will aim to open a field of study about discourses of common and complementary colonial experiences, with the potential of expansion across a wide range of historical fields. A major question to answer will be the issue of whether unified national colonialist discourses can be identified or whether there existed a variety of discourses by individuals and political or ideological groups. If the latter is the case, did the various discourses contain common elements which could be seen to contribute towards an identifiable national outlook.

II) Discourses of Imperialism and Early Globalization
• Industrialisation, imperialism and lebensraum politics
• “Made in Germany” as a British problem. The respective versions of an imperialist myth of multiculturalism
• Racial and bio-political theory in relation to colonialist discourse
• Contact and competition between British and German archaeologists and ethnologists

III) Travel Literature in the Age of Colonialism
• In the footsteps of Livingstone and Stanley:  British and German travel writing and colonialism
• The German reception of the Robinson Crusoe stories
• The perspectives and writings of Christian missionaries

VI) Discourses on the Medium- and Long-term Effects of Colonialism
• Similarities and differences between historical discourses on European overseas migration and modern discourses on migratory movement into and within Europe
• The impact of medical and other scientific research undertaken in the colonies
• The lasting effects of colonialism upon modern-day former colonies
• Vergangenheitsbewältigung of colonial pasts: nostalgia and/or apologies