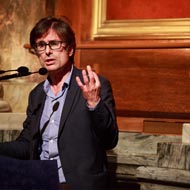 To celebrate our new building, and to inaugurate the Peston Lecture Theatre, we are delighted to invite you to ‘In Conversation with Robert Peston: Brexit Britain’ on Thursday 11 May 2017.

The event will begin at 6pm when Robert will be joined in conversation by QMUL alumnus Daniel Trinder (PhD Economics, 1998), Managing Director and Global Head of Regulatory Reform at Standard Chartered Bank, and Professor Philip Cowley, Director of the Mile End Institute and Professor of Politics in the School of Politics and International Relations at QMUL. Professor Sujoy Mukerji, Head of the School of Economics and Finance, will be chairing the event.

There will be an opportunity for questions from the audience before a drinks reception concluding at 8pm.