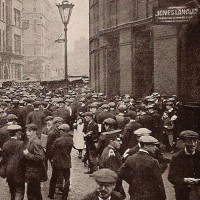 For nearly 70 years, Whitechapel was home to the UK’s largest Jewish population. This walk takes you on a route through Whitechapel in the words of two generations of local writers, including Russian-Jewish immigrant Thomas Eyges, who vividly describes his experiences of arrival and survival in late-Victorian London and Israel Zangwill, who lived and worked among the immigrant community and documented their complex subculture.

We will revisit the same locations as seen fifty years later by Polish-Jewish Esther Kreitman, whose dark fiction reflects the fragmentation of the Jewish community in the interwar East End.