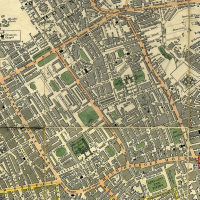 In the 1920s and 30s Bloomsbury was London’s most diverse neighbourhood, populated by writers and intellectuals from all over the world. Some came to put down roots; others felt permanently unrooted; some produced acute observations of a modern commercial city, a city of new freedoms and old prejudices; and for others London appeared dreamlike and unreal.

This walk brings together some unexpected perspectives on Bloomsbury from the work of émigré writers from British colonies -- C.L.R. James from Trinidad, Mulk Raj Anand from India, Christina Stead from Australia and Jean Rhys from Dominica, as well as from beyond the British Empire (for example Lao She from China).