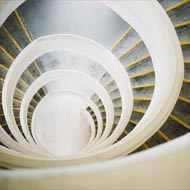 Counting may seem intuitive, but early humans probably had a number awareness which helped them to keep track of their surroundings, rather than the exact counting we think of today. In the continued quest for exactness, the question of “how many” arises as a central issue in many areas of mathematics, physics, and beyond. Due to the difficult nature of some counting problems, it is sometimes helpful to modify the question to “roughly how many,” as an approximate answer is easier to obtain and in many cases sufficient.

In this lecture, I will show the relevance of “how many structures are there of a given kind” in my own areas of speciality such as combinatorics and statistical physics, and how the endeavour to count structures continues to advance research. The focus will be on the counting of paths on a discrete lattice.

One example for such lattice paths is given by self-avoiding walks, which are paths on a regular lattice that do not self-intersect. The Encyclopædia Britannica lists self-avoiding walks as one of two examples of classical unsolved combinatorial problems. This problem has been at the forefront of research in statistical mechanics for more than half a century; self-avoiding walks have been of interest to chemists, physicists and mathematicians, Nobel Laureates and Fields Medallists alike.