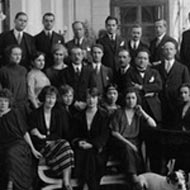 "The League of Nations Secretariat as a Site of Political Imagination"

What difference did the League of Nations Secretariat make to the practice and theory of international politics?  This talk takes us inside the Secretariat to meet some of the men (and one woman) who headed up its different sections, delving into the records of their internal “kitchen cabinet” meetings to uncover what they themselves thought they were doing.  The League’s high officials talked freely among themselves about the nature and scope of their authority, about how to balance national loyalties and international service, and about how to deal with public complaints of ineffectuality or lack of accountability.  Self-consciously, unevenly and buffeted by political winds, they nonetheless developed strategies and practices that challenged and changed the international system and that still influence it to this day.  Historians and political theorists should pay more attention to the Secretariat as a site for political innovation and political thought.

All attendees are invited to a drinks reception after the talk.

Susan Pedersen is Morris Professor of British History at Columbia University.  She has written widely on British, European and international politics after 1900.  Her first book examined the way European welfare states came to account for dependence; her second book, a biography of the visionary social theorist and social reformer Eleanor Rathbone, appeared from Yale University Press in 2004.  Pedersen’s new book, The Guardians: The League of Nations and the Crisis of Empire (Oxford University Press, 2015) was awarded the 2015 Cundill Prize for Historical Literature.

Susan Pedersen received her B.A. and PhD from Harvard University, where she was Professor of History and served for a time as Dean for Undergraduate Education before moving to Columbia in 2003.  She has held fellowships from the Guggenheim Foundation, the Princeton Institute for Advanced Study, the Radcliffe Institute, and the Wissenschaftskolleg zu Berlin, among others.  In 2014 she delivered the Ford Lectures at Oxford University on the subject of “Internationalism and Empire: British Dilemmas, 1919-39”. She is a regular contributor to the London Review of Books.