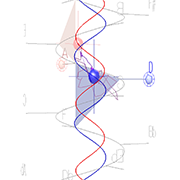 This lecture has been postpone. A new date will be announced in due course.

The lecture will include performances at the piano and visualisations of music structure.

What makes music, really good music, difficult to model? Can structures that shape our understanding of music be gleaned from sonic information? Can music knowledge be formalized and represented mathematically? We shall consider these questions in the context of performance, the primary means by which music is communicated to the listener.

An important function of performance is the use of prosodic variation to communicate an understanding of music structure, broadly defined as the product of musical sense making. Music structure is more than simply sonata form or ABA structure. It refers to all manner of musical coherence as generated by surface features and deeper ones, musical entities and boundaries, movements and arrivals. Multiple plausible structural solutions almost always exist. The structure experienced is subject to the vicissitudes of individual perception, that of the performer and that of the listener. The performance thus shapes the listener's experience of the music and, in particular, the listener's perception of the music's structure and meaning.

What then are the hallmarks of a successful performance? While many have likened music composition to mathematical proof because of its pursuit of "unexpectedness, combined with inevitability and economy" (Hardy 1940), few have openly acknowledged the premium that performance places on these same qualities. We shall consider the problem of musical sense making, and how successful designations of structural solutions—from local weighting of anchor tones to melodic segmentations to placements of tipping points—manifest properties of surprise, inevitability, and parsimony.

Elaine Chew joined Queen Mary University of London in 2011 as Professor of Digital Media in the School of Electronic Engineering and Computer Science. A pianist and operations researcher by training, she is affiliated with the Centre for Digital Music where she co-leads the centre's research theme on music cognition, creativity, and expression.

She was a recipient of NSF CAREER/PECASE awards and holder of Viterbi Early Career Chair at the University of Southern California and the 2007-2008 Edward, Frances, and Shirley B. Daniels Fellowship at the Radcliffe Institute for Advanced Study at Harvard University. She has authored a Springer monograph on Mathematical and Computational Modeling of Tonality, and recorded music of Peter Child on Albany and Neuma Records. She has been featured on Los Angeles Philharmonic's Inside the Music series and in interviews in documentaries on the lives of Coxeter and Modjeski.

Elaine Chew received PhD and SM degrees in Operations Research at MIT, a BAS degree in Music Performance (distinction) and Mathematical and Computational Sciences (honors) at Stanford University, and Fellowship and Licentiate diplomas in piano performance from Trinity College London.

The lecture will be followed by a networking drinks reception.