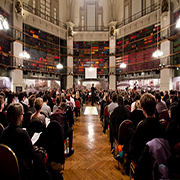 QMUL Orchestra and Choir with members of the East London Music Group, directed by Matthew Hardy and Paul Edlin

Programme to include:
Copland: Billy the Kid
Bernstein: Symphonic Dances from West Side Story

In the culminating concert of the term, QM Choir and Orchestra are joined by members of the East London Music Group in an all American programme that celebrates both North and South!  American tales come to life through the medium of music.  Aaron Copland’s dramatic ballet score of 1938, Billy the Kid, is one of his most popular orchestral works while Leonard Bernstein’s retelling of Romeo and Juliet needs little introduction.  Bernstein reworked the music to West Side Story into a series of symphonic dances, which are among the most remarkable of his entire orchestral oeuvre.

Music at QMUL is very grateful to the Westfield Fund for supporting the involvement of the East London Music Group as well as helping make the programme possible.