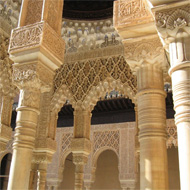 The relationship between Islam and violence is complex.  The perception of Islam as an inherently violent religion has been a recurrent theme from the earliest engagements between European Christians and Muslims to contemporary Islamophobia.  On the other hand, today's pleas from many Muslim (and non-Muslim) leaders for a separation between violent acts and the "true" Islam feel shallow, whilst remaining politically necessary.  How do we break through the stereotypes of violent Islam and Islam as peace?  In this lecture, Robert Gleave will propose that contemporary notions of violence, rather than anything inherent in Islam,  have created these stereotypes, and by recognising this limitation, a more productive discussion of Islam and violence becomes possible.
Robert Gleave is Professor of Arabic Studies at the Institute of Arab and Islamic Studies, University of Exeter.  His research focusses on Islamic legal theory, Shiism and Muslim scriptural interpretation.  Since 2010 he has been leading two major RCUK projects within the Global Uncertainties programme:  Legitimate and Illegitimate Violence in Islamic Thought and Islamic Reformulations: Belief, Violence and Governance.  His most recent publication is the edited collection with István Kristó-Nagy: Violence in Islamic Thought: from the Qurʾān to the Mongols (Edinburgh University Press, 2015).