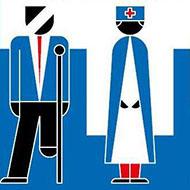 The guest speaker is Professor Tilli Tansey OBE, Professor of the History of Modern Medical Sciences at QMUL.

The content of the lecture will be developed in collaboration with local teenagers as part of Centre of the Cell's Heritage Lottery Funded project 'Wartime Medicine and Innovation'. The lecture will last for 45-50 minutes and will be followed by a question and answer session.

Tilli joined QMUL in October 2010. She works on the history of modern medical sciences.

Tilli completed a PhD on the brain chemistry of the octopus before working as a research neuroscientist for many years. In 1990 she was awarded a second PhD in medical history, and since then has worked at the Wellcome Trust and UCL (becoming professor in 2008). She currently heads the History of Modern Biomedicine Research Group at QMUL.

Tilli specialises in the history of twentieth and twenty-first century medical sciences, particularly physiology, pharmacology and the neurosciences, and she also is interested in the development of medical research funding and policy.

Tilli was awarded an OBE in the 2014 Honours List.