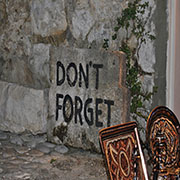 This lecture will be followed by a networking drinks reception.

This lecture will be streamed live. To watch the live stream on Wednesday 9th November 2016 please click here.

The crisis and ultimate collapse of Soviet-style communism across Eastern Europe in 1989 was framed by many scholars in terms of the rise of civil society. The democratic ‘third wave’ that engulfed the region’s authoritarian regimes was predicted to deliver participation and emancipation to citizens denied political voice and agency for over four decades; to enable the articulation of their interests and engage them in the momentous processes of political, economic and social reform. Civil society was held up as a panacea for initiating progressive politics, for implementing policy reform, for instigating post-conflict reconstruction, and, of course, driving forth the Europeanization of these newly democratic polities. This idealistic vision of what civil society could and should achieve in the Czech Republic, in Bosnia-Herzegovina, or in Serbia paid little heed to the realities of established western democracies.

From various perspectives – environmental activism, judicial reform, minority rights – this lecture explores the complexities and contradictions of engaging citizens in the post-communist and post-conflict states of Europe.

Adam Fagan obtained his PhD from the University of Manchester in 1997. He has been at Queen Mary University of London since 2000, where he is currently Professor of European Politics and Head of the School of Politics and International Relations. Adam’s current research focuses on the Europeanization of the Western Balkans with a particular focus on environmental governance and judicial reform. His research has been funded by the British Academy, the Nuffield Foundation and, most recently, the European Commission. Adam was awarded a Leverhulme Trust Research Fellowship in 2011 and appointed as a Professorial Research Fellow at the LSE between 2013 and 2015. He has co-edited East European Politics (Taylor and Francis) since 2012 and is also an editorial board member of Environmental Politics. His published work includes Europeanization of the Western Balkans: Environmental Governance in Bosnia-Herzegovina and Serbia (Palgrave 2015), Europe’s Balkan Dilemma: Paths to Civil Society or State-Building? (I.B. Tauris, 2010) and Environment and Democracy in the Czech Republic (Edward Elgar, 2004). He has edited a number of volumes and collections, including (with JoAnn Carmin) Green Activism in Post-Socialist Europe and the Former Soviet Union, (Routledge 2011) and (with Petr Kopecky) The Routledge Handbook of East European Politics.

This lecture is free to attend but you must book in advance.