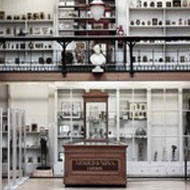 Throughout history, people have perceived a need to ‘kill’ the dead. Vampires and revenants were, and in some places still are, thought to come back from the grave and trouble the living. Jonathan will explain the history of vampire slaying in both folklore and fiction, from the iconic wooden stake to ultraviolet bullets. He will also share his research into the mysterious ‘vampire killing kits’ and how they fit into this larger tradition of supernatural self-defence.

Jonathan Ferguson is Curator of Firearms at the Royal Armouries in Leeds. The Royal Armouries holds in trust for the public one of the finest collections of arms and armour in the world, from exquisite pieces of the gun maker’s art, to the most functional military weapons, and from the medieval period to the present day. Jonathan's research interests include the use, effect, and depiction of arms in popular culture. He has made several television and radio appearances, including NBC's Today programme and National Geographic’s ‘How Sherlock Changed the World’. He also pursues a sceptical interest in the paranormal in his spare time, an interest that stems from the gift of a Ladybird version of 'Dracula' at a young age. He is especially enthusiastic when the two things overlap, as they do in the mysterious case of the 'vampire killing kits', about which he has made the definitive critical study, published in Fortean Times in 2012. He has acquired an example for the Royal Armouries, and is pleased that visitors share his enthusiasm for these esoteric objects. You can Tweet @Royal_Armouries for more information