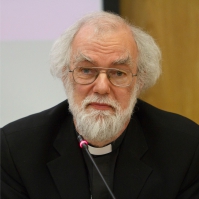 The George Lansbury Memorial Trust was founded in 2012 to commemorate the life, work and legacy of George Lansbury (1859-1940). A pioneering campaigner for peace, women’s rights, local democracy and improvements in labour conditions, Lansbury was an adopted East Ender who made a great contribution to local as well as national life. George Lansbury was also one of the most distinguished Christian Socialists in British history, whose campaigning politics sought to apply his faith to public life.

To reflect on Lansbury’s example and legacy for contemporary relations between religion and politics we are privileged to have as the third George Lansbury Memorial lecturer an extremely well-qualified speaker in Dr Rowan Williams.

Dr Williams’ distinguished career as a theologian culminated with his appointment successively as Archbishop of Wales (2000-02) and Archbishop of Canterbury (2002-12). His tenure of the See of Canterbury was notable for his efforts to re-consider the role of religion in national life in a changing and multicultural Britain. Dr Williams is now the Master of Magdalene College, Cambridge.