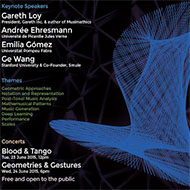 Geometries And Gestures is the second of two concerts offered as part of MCM2015, the Fifth Biennial International Conference on Mathematics and Computation in Music (22-25 June 2015) -- mcm2015.qmul.ac.uk .

Rational Melodies (1982) may be played by any instrument, in any octave or transposition. It is not necessary to play the whole set, and performers are welcome to group selected melodies into suites however they like. The pieces are intended primarily for soloists, though thy may also be performed by groups of instruments, playing in unison or alternating in antiphonal patterns.

Rationality, or more precisely, deductive logic, has seldom been the controlling factor in musical composition. Composers are usually more interested in inspiration, intuition, feelings, self-expression. Lately, however, there has been a tendency for composers to give up individual control over every note, and rely on factors outside themselves. Pieces have been controlled by the wind, by chance, by the idiosyncrasies of tape recorders, or by unpredictable variations in electronic circuitry, for example, and it seems to me that composing by rigorous adherence to logical premises involves a similar way of thinking. ~ T.J.

Chord Geometries in Italian Pop. By taking some typical Paolo Conte's harmonic progressions as a starting point, I will show the relevance of a geometric approach in the organization of the formal structure of some recent songs. A special emphasis will be given to Hamiltonian Cycles within the Tonnetz, as they have been used in a series of poetry-based Hamiltonian Songs (from Aprile, with text by Gabriele D'Annunzio to La sera non pi la tua canzone, with text by Mario Luzi). Videos and musical examples are available at the author's music web page: repmus.ircam.fr/moreno/music. ~ M.A.

Giants Steps is a composition that has been created following a mathematical analysis of Coltrane's famous composition Giant Steps. The analysis shows that Coltrane essentially arranged his harmonies (all seventh chords) around the inversion symmetry of C-major, i.e. inversion at D. Two large groups of nine and eleven chords, respectively, build his big architecture. The second group even realizes a totally symmetric trajectory of chords following the third Messiaen scale, which is the complement of the augmented C triad, {C, E, G-sharp}. From our analysis it follows that Coltrane's construction can be given a polarity of a fast part, being opposed to a blues-y part that makes evident the Love Supreme motif {F, A-flat, F, B-flat}. Our composition uses all of these analytical facts and morphs them, following Boulez's creative analysis, to an improvisation that flies around these structures and eventually dissolves them into gestural dynamics of artistic presence. ~ G.M.