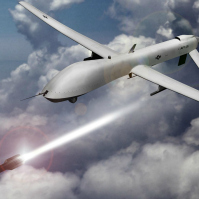 On August 21st 2015, an RAF Reaper drone flying over Syria carried out the first publicly acknowledged British assassination – or targeted killing - away from the regular battlefield. This killing of two UK citizens has led to consternation and celebration in equal measure. Only the US and Israel have admitted to similar killing programmes – and both are pioneers of armed drone use. So how did Britain find itself here?

Chris Woods will speak about a decade-long collaboration between the Royal Air Force and their American counterparts that has seen British operators fly more than 2,000 missions on US Predator and Reaper drones. From 2008 the UK has also operated its own small fleet of advanced Reaper drones – which increasingly dominate our wars. In Iraq today, more than one in two airstrikes by the UK are carried out by Reaper.

It’s argued that drones lower the risk to civilians – or even remove it. Others say this ‘risk free’ warfare is actually lowering the threshold for war itself.

Britain’s defence chiefs have long prided themselves on avoiding the worst problems associated with America’s drone use in places like Pakistan and Yemen. But now the Cameron government, without debate, has claimed the right to kill any enemy it chooses, in any place, beyond the battlefield. At least ten names now sit on a British ‘kill list’, with the Defence Minister acting as judge, jury and executioner. What are the implications? What does international law say? And what happens next?