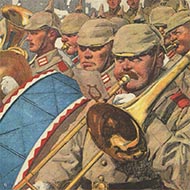 During and after the First World War many composers commented on the hostilities through their works. We can find demonstrations of patriotism, sorrow and grievance, but also criticism of the unprecedented carnage.

The noise of the battlefield, hymns and military music were all incorporated. They operate as symbols of the composers views of the war. This lecture will present examples of various war related compositions in different countries. It will discuss how music introduces war noises and argue why these can only be found to a limited degree. Stefan Hanheide is Professor of Music History at the University of Osnabrück. His current research focuses on music in the context of political violence. Topics are the music related to the Thirty Years War in the seventeeth century and the wars and violence during the twentieth century. His recent publications include “Music positions its forces – Functionalisations of Music during the First World War” (2013) and “Pace: Music between war and peace. 40 portraits of compositions” (2007). In Osnabrück he organizes since 1993 concerts under the title “musica pro pace”