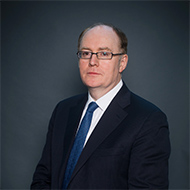 Globalisation and the UK economy

Dr Gerard Lyons is Chief Economic Advisor to Boris Johnson, the Mayor of London, taking up this role in January 2013. His first book 'The Consolations of Economics' is released by Faber & Faber in June 2014. Previously he spent 25 years in senior roles in The City, at Chase Manhattan, Swiss Bank, DKB and most recently at Standard Chartered where he was Chief Economist, Board Advisor and Head of Global Research. An expert on the world economy, global financial markets and economic policy, he has a great forecasting record: top global forecaster (out of over 350) in 2010 & 2011; one of only two UK forecasters predicting a deep recession ahead of the financial crisis. Lyons has testified to the US Senate & Congress, UK Parliamentary Committees & spoken at the EU-China Summit in Beijing. He gained his PhD on “Testing the efficiency of financial futures markets" at QMC.   Twitter: @DrGerardLyons