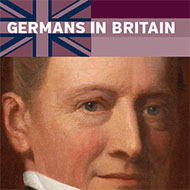 A lecture to launch the 'Germans in Britain' Exhibition

Queen Mary University in partnership with the Migration Museum Project is delighted to invite you to the launch of the 'Germans in Britain' Exhibition. At 6:30pm, Emilie Oléron Evans will deliver a lecture entitled ''Nikolaus Pevsner, a 'Kunsthistoriker' in Britain''. This will be followed by a reception to allow time to enjoy the exhibtion itself.

The works of Nikolaus Pevsner (1902-1983), a British scholar of German origin, played a major part in the ascent of the history of art and architecture to the status of an academic discipline in Britain. Pevsner was a successful mediator between university and society, in his roles as editor, broadcaster and art critic. These activities were based on German cultural models and gradually transformed him, an interpreter of culture, into a national institution.
Emilie Oléron Evans has recently completed a PhD on Nikolaus Pevsner, achieved jointly at Queen Mary University of London and at the Université Sorbonne Nouvelle Paris III.