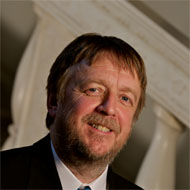 The Third “Lord Brain Memorial Lecture” will be held on from 5:30-7:00pm on 12th June 2014 in the Perrin Lecture Theatre, Blizard Building Whitechapel, followed by a reception.

John Hardy received his degree in Biochemistry from Leeds in 1976 and his PhD from Imperial College in Neuropharmacology in 1979.  He did postdocs at the MRC Neuropathogenesis Unit and the Swedish Brain Bank, in Umea,  where he started to work on Alzheimer’s disease.  In 1985 he took the job of Lecturer in Biochemistry and Molecular Genetics at St Mary’s Hospital, Imperial College, where he began working on the genetics of Alzheimer’s disease.  In 1991 he led the group which found the first mutation in the amyloid gene which caused Alzheimer’s disease.  This finding led him and others to formulate the amyloid hypothesis for the disease.  In 1992 he moved to the United States, to the University of South Florida.  In 1996 he moved to the Mayo Clinic where he became Chair of the Department of Neuroscience in 2000.  In 1998 he was part of the consortium which identified mutations in the tau gene in Pick’s disease.  In 2001 he moved to the NIH to become the Chief of the Laboratory of Neurogenetics, where he was part of the group which found triplications in the synuclein gene caused Parkinson’s disease.  He returned to the Department of Molecular Neuroscience at the Institute of Neurology in 2007.  He has won the Allied Signal, Potamkin, MetLife  and Kaul Prizes, for his work on Alzheimer’s disease and the Anna Marie Opprecht Prize for his work on Parkinson’s disease.  More recently he was awarded the 2011 Khalid Iqbal Lifetime Achievement Award in Alzheimer’s Disease Research and the IFRAD 2011 European Grand Prize for Alzheimer's Research.  He has been elected a member of the Academy of Medical Sciences and has been awarded an honorary MD by the University of Umea, Sweden.  He was made an FRS by the Royal Society in 2009 and in 2010 was awarded an honorary Doctor of Science degree by the University of Newcastle.  He has three adult children and three grandchildren who live in the US.

Abstract:
Since the sequencing of the human genome in 2001, the power of genetic analysis has increased beyond the wildest dreams of geneticists.  We can now find all types of genetic predispositions to disease: from causative mutations, to risk factors which have quite small effects on disease risk.  Our group has applied these technologies to neurodegenerative diseases: especially to Alzheimer’s disease and Parkinson’s disease.  In each of these diseases we now identified more than 20 genetic loci which influence disease risk.  In my lecture, I will discuss how we made these findings and show how, as we identify these loci, they are delineating the pathways which lead to the disease.  In Alzheimer’s disease, amyloid metabolism, cholesterol metabolism and the control of microglial activation are the key pathways: in Parkinson’s disease, autophagy and mitophagy are implicated as the key disease related pathways.