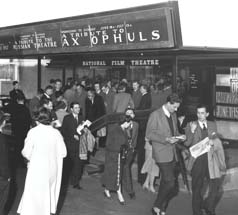 The British Film Institute (BFI) is one of the UK’s major government-supported cultural institutions. From a modest start in the 1930s it grew after the war to encompass every kind of film-related activity from production, archiving and exhibition, to film criticism and education. By the year 2000 its turnover was approaching £30m and it had become a central point of reference for anyone whose interest in film stretched beyond what’s on at the local multiplex. In 2011 it was designated the government’s “lead body” for film and took over from the UK Film Council the task of disbursing a further £30m of Lottery funding, mainly for commercial film production.
This history, fascinating in itself, raises several wider questions. What did governments think they were supporting? A mix of vaguely useful activities to do with a popular informational and entertainment medium? Or something integral to national culture and identity? Is there something uniquely British about the way different governments have shuffled responsibility for film and television between different ministries in response to obscurely felt shifts in national life and the role of the arts and media within it? Is “film culture” the best concept under which to grasp the complexity of these phenomena?

Geoffrey Nowell-Smith is the author of Making Waves: New Cinemas of the 1960s (2008) and the editor of The Oxford History of Cinema (1996) and is also known as editor and translator of the Prison Notebooks of Antonio Gramsci. His colleague Christophe Dupin is Senior Administrator at the International Federation of Film Archives (FIAF) in Brussels. Their joint research at Queen Mary on the history of the BFI was supported by a grant from the Arts and Humanities Research Council.