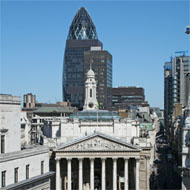 The Government has set forth an ambitious plan to make the UK financial system more robust and more resilient and it has pledged to make the retail sector a safer place for consumers. At the same time, however the proposed reforms have been received with scepticism by the industry and other stakeholders. The Centre for Commercial Law Studies (CCLS) at Queen Mary, University of London is organising a roundtable event to examine the draft Financial Services Bill 2010 and 2012 and to critically overview the progress that has been made so far and the challenges that lie ahead.

The participants in the roundtable discussion are:

Mr Charles Randell is a Partner at Slaughter and May and he is an expert in mergers and acquisitions, public sector work and financial stability and bank restructuring. He has also advised the HM Treasury on a range of issues arising from the credit crunch including Northern Rock, Bradford and Bingley and the Icelandic banks.

Professor Rosa Lastra is Professor in International Financial and Monetary Law at CCLS at Queen, Mary, University of London. She has served as a consultant to various international and regional organisations including the International Monetary Fund, the European Central Bank and the World Bank. She has advised the IMF on issues of cross-border bank insolvency and the House of Lords regarding its inquiry into the EU financial regulation and responses to financial crisis.

Professor Philip Rawlings is the inaugural Roy Goode Professor of Commercial Law at CCLS, QMUL. He has advised the Law Commissions of England and Wales and of Scotland in their inquiry into insurance contract law and he has been involved in discussions at the think-tank Demos on the issue of financial crisis.

Professor Takis Tridimas is Sir John Lubbock Professor of Banking Law at CCLS, QMUL. He is a barrister at Matrix Chambers and he has advised EU institutions, state organisations and the banking sector on matters relating to the financial and Eurozone crisis.

Dr Andromachi Georgosouli is a lecturer in International Commercial Law at CCLS, QMUL and her research focuses on crisis prevention and management, financial resilience and supervisory and enforcement strategy. She has been involved in discussions at the think-tank Demos on the issue of financial crisis and regulatory reform and more recently she gave a paper at a conference at the Financial Services Authority on the implementation of judgement-led regulation by the FCA and the PRA.