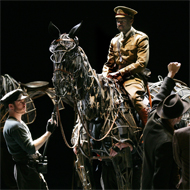 Nadia Davids discusses adaptation for puppetry performance with the founders of Handspring Puppet Company, Adrian Kohler and Basil Jones, and the Artistic Director of Handspring Puppet Company UK, Mervyn Millar. Projects under investigation include Woyzeck on the Highveldt (1993) Faustus in Africa! (1996), Ubu and the Truth Commission (1997) War Horse (2007) and Crow (2012), a collaborative production inspired by poems by Ted Hughes and directed by Millar.

Handspring Puppet Company was founded in Cape Town in 1982 and is still run by co-founders Basil Jones and Adrian Kohler. Their award-winning puppet designs and ingenuity have led them to create memorable and exciting theatre including Or You Could Kiss Me, with Neil Bartlett at the National Theatre, Tall Horse, The Chimp Project, and a series of ground-breaking shows in collaboration with South African artists William Kentridge, including Woyzeck on the Highveldt, Faustus in Africa! and Ubu and the Truth Commission. In 2005 they began working with the National Theatre on War Horse. The show is now running in London, New York and Toronto, has been seen by over a million people and has inspired a blockbuster film by Steven Spielberg.In New York, Kohler and Jones received a Special Tony Award for Handspring Puppet Company, The Special Achievement Award from the Outer Critics Circle, and (with the War Horse Creative Team) The Critics Circle Award and The Drama Desk Award for thrilling stagecraft (all in 2011). For War Horse, in London, Handspring (with Rae Smith) received the London Critics Circle Award (2007), The Evening Standard Award (2007) and the 2007 Olivier Award – all for Design. Their company has also received a number of Vita Awards for theatre as well as the Tshwane University of Technology’s Lifetime Achievement Award (2006) and The Molteno Medal (Gold) from The Cape Tercentenary Foundation (2010). Built around British-based puppeteers, designers and directors who have experience of working with Handspring, Handspring UK will create new work from a London base.

Adrian Kohleris the Artistic Director and co-founder of Handspring Puppet Company.  Kohler has designed and made most of the company’s puppets over the years. His figures have been exhibited at the SA National Gallery, Cape Town and by the Museum for African Art in New York. Kohler’s puppets are represented in the collections of Old Mutual Art Collection in Cape Town, the SA Constitutional Court, Johannesburg and the Stadtmuseum Munich. Kohler is married to Basil Jones, Handspring’s Producer. Basil Jonesis co-founder and Executive Producer of Handspring Puppet Company and founder of Handspring Trust, which is active in Barrydale/Smitsville. He is married to Adrian Kohler. Jones is the recipient of the Naledi theatre award for best Executive Producer (2012).

Mervyn Millar, Artistic Director of Handspring Puppet Company UK, has an association with Handspring going back to 1999. He has worked in development and production on numerous productions including War Horse, for which he has directed puppetry in the London, Toronto and New York runs. He was Director at the Finborough Theatre between 1998 and 2000 and has directed at theatres including the National Theatre, BAC, and NVT (Norway) and in the late 1990s his company wireframe made pioneering experiments in immersive installation-theatre. His collaboration with Kazuko Hohki and Andy Cox, Evidence for the Existence of Borrowers, won a Total Theatre Award and a Herald Angel Award. He is the author of two books about Handspring: The Horse’s Mouth and The Journey of The Tall Horse. In June 2012 Mervyn will direct Handspring UK’s first production Crow, inspired by poems by Ted Hughes, and created in collaboration with dramaturg Matthew Dunster and choreographer Ben Duke.

Nadia Davids is a South African playwright and a lecturer in Drama at Queen Mary, University of London. She has written four plays, among them, At Her Feet and Cissie, which have been staged at the Market Theatre in Johannesburg, the Baxter Theatre in Cape Town and at various performance spaces in Holland, New York and London. Through her research and creative projects Nadia is interested in revealing and exploring the intersection between art and politics, the use of art as a tool for political restitution, the limitations placed on the imagination through political advocacy and the connectivity between notions of memory, post-memory, and oral traditions. Her research interests include South African Theatre, performance and/as historiography, physical theatre, and public space.