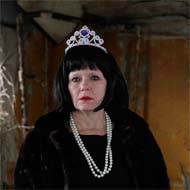 Jen Harvie discusses subversive adaptations with artist and scholar Lois Weaver, whose work with Split Britches has investigated queer sexuality and political resistance by reworking canonical texts. Weaver’s productions include Beauty and the Beast (1982), Little Women: The Tragedy (1988) and Belle Reprieve (1990), based on Tennessee Williams’ A Streetcar Named Desire.

Lois Weaver is Professor of Contemporary Performance Practice at Queen Mary University of London and is an independent performance artist, director, and activist. She was co-founder of Spiderwoman Theatre and the WOW Café Theatre in New York City and Artistic Director of Gay Sweatshop Theatre in London. Weaver has been a performer, director, and writer with the Split Britches Company since 1980. In 2006 she was involved in Staging Human Rights, a People’s Palace Project initiative that used performance-based practices to explore human rights in women’s prisons in Brazil and the United Kingdom, which inspired an international conference and festival on the themes of performance and human rights for which Weaver was the Artistic Director. She is currently Artistic Director of the Air Project, an Arts Council of England funded initiative that nurtures and sustains established Live Art practitioners and emerging artists in the UK.

Jen Harvie is Professor of Contemporary Theatre and Performance and her research focuses on the ideological effects of contemporary performance's material and cultural practices,  such as where it happens, how it's funded, who makes it and how. She has recently published on modes of devising (as co-editor of Making Contemporary Theatre: International Rehearsal Processes, Manchester University Press) and on theatre in urban contexts (as author of Theatre & the City, Palgrave Macmillan). She is co-editor of Palgrave Macmillan's series Theatre &. She is currently writing a monograph on performance at the intersections of social democracy and neoliberal capitalism and she is collaborating with Lois Weaver on a book on Lois's practice