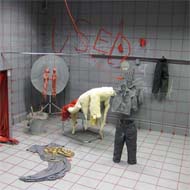 Julia Bardsley and Simon Vincenzi in conversation with Dominic Johnson

THIS EVENT IS NOW SOLD OUT

Dominic Johnson discusses the notion of adaptation, appropriation and re-enactment in performance with live artists Julia Bardsley and Simon Vincenzi. Projects under investigation will include Bardsley’s Medea: Dark Matter Events (2011) and Vincenzi’s The Infinite Pleasures of the Great Unknown (2008).

Julia Bardsley is an artist working with performance, video photography, and sculptural objects/garments. Bardsley has adapted Macbeth (1993) and Hamlet (1994), and her latest work Medea: Dark Matter Events (2011), is an ongoing collaborative research project with Brazilian artist, Jacob Alves. MEDEAROOM, a performance/installation of the Medea material, will be part of the What Matters….Festival in London in April 2012. Other recent works include The Divine Trilogy, a series of solo pieces which have been presented at UK and European festivals, and meta-FAMILY, a modular ensemble piece presented in Brazil and London in 2010 and 2011, which will appear in Trouble#8, Brussels, the Basement, Brighton & Norfolk & Norwich Festival in 2012–13. Julia runs BARDSLEY_POPPY projects with Andrew Poppy. They recently completed Clube Redondo, phase one of children’s experimental workshops, co-produced with CasaBranca (Lisbon/Lagos). From 1991 to 1994 Julia was joint Artistic Director of the Leicester Haymarket & Young Vic Theatres. In 2007, she was awarded an Honorary Doctorate by Middlesex University. Julia is an ArtsAdmin Associate Artist.

Simon Vincenzi is a London-based theatre director, choreographer and designer. With Bock & Vincenzi (1996-2007) he made Three Forest Dances, In A Room Of Wood, Being Barely There I Saw You Too, and Breathtaking. The culmination of their seven-year research period was The Invisible Dances, a theatre work in three acts presented over three years. Vincenzi’s work continues to investigate the interface of theatre, movement and visual languages. His ongoing project Operation Infinity, begun in 2007, is a series of theatre pieces that inhabit different spaces and time frames, and are performed by the fictional theatre company Troupe Mabuse. Vincenzi’s work inspired by King Lear was entitled The Infinite Pleasures of the Great Unknown (2008). Part installation, part performance and part continuous late night film show, The Infinite Pleasures has been presented at Netmage Festival, Bologna; Theatre Der Welt, Halle; Inteatro Festival, Chiaravalle; Toynbee Studios, London & Tramway, Glasgow.

Dominic Johnson is Lecturer in Drama at Queen Mary, University of London. Dominic carries out written and practice-based research into performance and cultural politics, and his research interests include performance art, live art and body-based practices, representations of sex and sexuality, and subcultural histories, including body modification and performance in alternative spaces. His forthcoming monograph, Glorious Catastrophe: Jack Smith, Performance and Visual Culture for Manchester University Press is due in 2012, and presents a critical analysis of Jack Smith’s work across performance, experimental film and writing, from the early 1960s until his AIDS-related death in 1989.