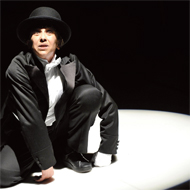 Mohamed Kacimi and Colin Teevan in conversation with Sarah Grochala

Sarah is a playwright and an academic. She recently completed her doctoral degree at Queen Mary. Her research examines the use of dramatic structure in contemporary British playwriting. She was the winner of OffWestEnd.com's Adopt a Playwright Award in 2011 and was shortlisted for the Leah Ryan Prize for Emerging Women Writers in 2010. Her plays include S-27 (Finborough 2009, Winner of the Amnesty International Playwriting Competition 2007), Waiting for Romeo (Pleasance Islington 2009; Edinburgh Festival 2006) and Open Ground (Theatro Technis 2005). Her plays have been performed internationally in Australia, Canada and Poland. She is currently under commission at the RSC. Sarah works as a senior reader for Theatre 503 and has taught at at Mountview, Central School of Speech and Drama, Queen Mary, Birkbeck and Kingston University.  Before becoming a playwright, she worked as an actress in theatre and television. Theatre credits include Little Women (Duchess WE), Top Girls (BAC), Laying the Ghost (Mill at Sonning). Television includes Judge John Deed (BBC), Storm Damage (BBC) and Every Woman Knows a Secret (Carnival).

Mohamed Kacimi is an Algerian playwright and novelist based in Paris since 1982. His writings for the theatre include La Confession d’Abraham (2000), 1962 (2007), Nuits à Bagdad (2008) and Terre Sainte (2009) translated into English as Holy Land by Colin Teevan. His stage adaptation of Lebanese author Rachid El-Daïf's novel, Qu'elle aille au diable Meryl Streep (Meryl Streep Can Suit Herself), opened at the Théâtre du Rond Point in Paris in 2008. Mohamed is Delegate General of Écritures du Monde, an not-for-profit organisation that promotes cultural exchanges between young playwrights and directors of diverse backgrounds.

Colin Teevan is a playwright, translator and writer for screen. His work has been produced by many leading theatres including the National, the Young Vic, the Soho Theatre and the National Theatre of Scotland. His recent stage work includes: There Was A Man, There Was No Man (2012) for the Tricycle Theatre as part of their season entitled The Bomb - A Partial History; The Lion of Kabul (Tricycle Theatre, 2009); How Many Miles to Basra? (winner of 2007 Clarion Award for Best New Play); The Bee (2006) and The Diver (2008), both co-written with Hideki Noda. Teevan has also written for television, most recently for an episode of the ITV drama Vera, and a forthcoming trilogy for RTE and Touchpaper TV. Teevan is Senior Lecturer in Creative Writing at Birkbeck College, University of London. CONTACT INFO,

Sarah Grochala is an award-winning playwright who has recently completed her doctoral degree at Queen Mary, University of London. Her research focuses on the theatre text in British contemporary theatre, and examines the assumed link in contemporary British playwriting between social realist form and the notion of the political.