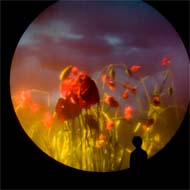 THIS EVENT IS NOW SOLD OUT

Nicholas Ridout discusses the practice and processes of adaptation with director Romeo Castellucci of Socìetas Raffaello Sanzio, Italy’s leading experimental theatre company. Recent projects by SRS include The Minister’s Black Veil (2011) from a short story by Hawthorne and a trilogy inspired by Dante’s Divina Commedia (2008).

After graduating with a degree in painting and scenography from the Academy of Fine Arts in Bologna, in 1981 Romeo Castellucci founded Socìetas Raffaello Sanzio with Claudia Castellucci and Chiara Guidi. Castellucci developed an original stage art, bringing together a range of art forms – theatre, music, painting, opera, mechanics, the creation of images – in order to reach his audience. He has created numerous productions in the role of author, director and designer of lights, sound and costumes, and is known as an author of performance based on the totality of the arts. During the 1990s Castellucci took on classical texts as well as epics, notably Gilgamesh (1990), Hamlet (1992), The Orestea (1995), Giulio Cesare (1997) and Voyage au bout de la nuit (1999). Castellucci has also written various essays on the theory of directing plays, which trace the development of his theatre. The French Government awarded him the title of Chevalier de l’Ordre des Arts et des Lettres in 2002. In 2008 he was Artiste Associé at the Festival d’Avignon. His productions are regularly invited and commissioned by the most prestigious theatres and festivals in world-wide.

Nicholas Ridout is Reader in Theatre and Performance Studies at Queen Mary, University of London. His research is concerned primarily with a political understanding of the theatrical event as an instance of cultural production, an affective experience and a mode of social organisation. Nick is the co-author of The Theatre of Socìetas Raffaello Sanzio, with Claudia Castellucci, Romeo Castellucci, Chiara Guidi and Joe Kelleher (Routledge, 2007), and author of Stage Fright, Animals and Other Theatrical Problems (Cambridge University Press, 2006).