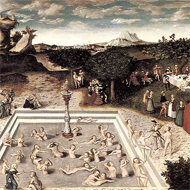 In terms of cultural geography, towns like Bath or Marienbad would seem much less important than, say, London or Berlin. A careful look at the multi-facetted history of these places, however, reveals that they are in fact symptomatic and indicative of all the major transformative processes that constitute the history of European society. Presenting these places as situated “within a web of interconnected medical, philosophical, aesthetic, social and religious discourses” (Anderson / Tabb) and drawing on Foucault’s notion of ‘heterotopia’, the lecture will show their paradoxical centrality with regard to intellectual, social and cultural history - and the history of medicine -, touching on processes such as secularization, shifting class structures, the emergence of the welfare state, the development of tourism etc.