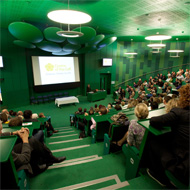 Evolution of the human brain: why was bigger better?

The Lord Brain Memorial Medal Lecture and Medal honours a healthcare professional or scientist who has worked in the UK and have made a major scientific contribution to field of neuroscience.

The lecture is held biennially and hosted by the Centre for Neuroscience and Trauma in the Blizard Institute at the Barts and The London School of Medicine and Dentistry.

Professor Colin Blakemore is the second recipient of the Lord Brain Memorial Medal. The medal has been awarded for the scientific contributions he has made to the field of Neuroscience in the UK.

He is a Professor of Neuroscience at Oxford. From 2003-2007 he was Chief Executive of the MRC. His research has been concerned with vision, development and plasticity of the brain, and neurodegenerative disease.

To attend and book, please email your details to Surinder Pal at s.pal@qmul.ac.uk